Holiday on the Holiday – Plain of Jars 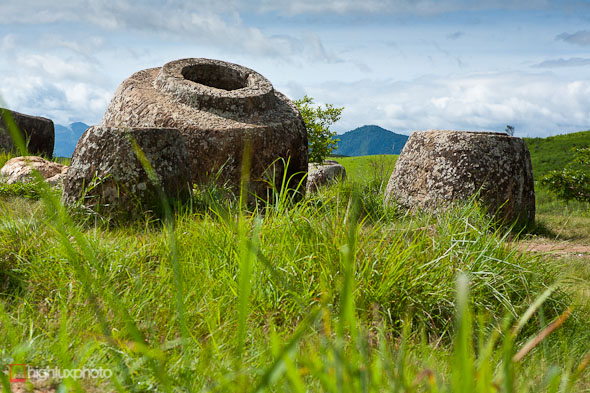 Part two of our road trip took us south, from the Houapan province into Xieng Khouang and the high plateau of the Plain of Jars.

The Plain of Jars or Plaine Des Jarres as it more historically known resonates for both archaeologists and historians alike for two reasons: it’s a megalith treasure trove, with thousands of giant sandstone and basaltic jars thought to be up to 2000 years old, scattered in clusters of as many as 300 over dozens of sites – their origins and purpose still speculated over.

Secondly, the region was torn ragged by ground battles and a massive US-led aerial bombing campaign during the Laotian Civil War (also known as the Second Indochina War and the Secret War). During the period from 1964-73 the US, in support of the Royal Lao Army dropped over two million tons of bombs on Laos in an attempt to disrupt and destroy Pathet Lao and North Vietnamese communists intent on taking control of the country. Laos is the most bombed country in the world, per capita, with an average of a plane load of bombs dropped on the country every 8 minutes for a decade! An onslaught from which the region is still reeling.

We drove first to Muang Kham and then onto Phonsavan where we spent a day checking out three Plain of Jars archaeological sites and a few war relics.

For more on Phonsavan/Plain of Jars and the Secret War click here. Hobomaps make a brilliant map for the area too. 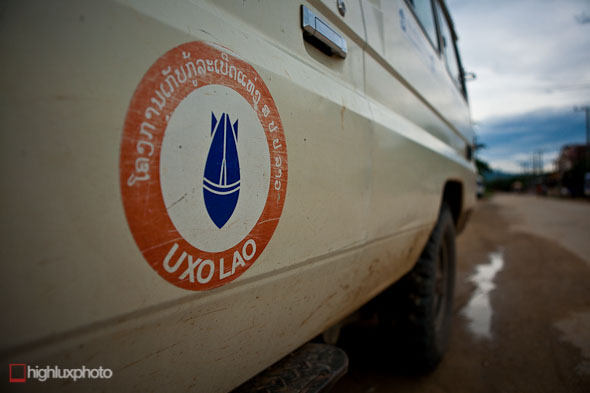 The legacy left from a decade of carpet bombing by the USA and Royal Laos forces is millions of items of UXO – unexploded ordinance. UXO Lao is a Lao government organisation tasked with monumental job of clearing villages and farming sites from UXO. Several foreign NGOs also operate in the region, helping to clear sites and defuse or destroy items found by villagers, most noably Mines Advisory Group, or MAG. In 2006 alone 59 people were killed or injured by UXO – 33 years after the last bomb was dropped and after decades of UXO clearance. 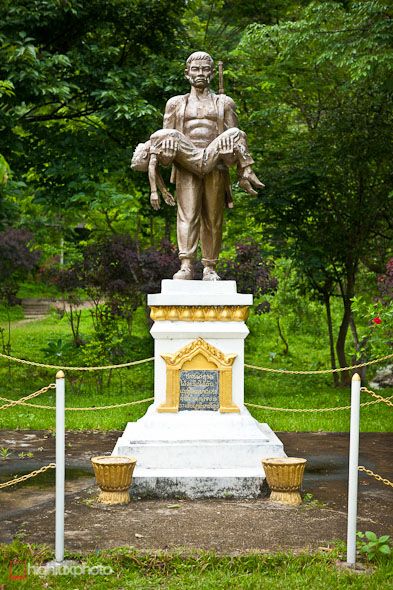 Monument at Tham Piu, a site of tragedy where over 300 villagers sheltering in a limestone cave were killed when the cave was deliberately bombed by two US jets. Relentless bombing drove thousands of people from their homes to seek shelter in many limestone caves around the region. 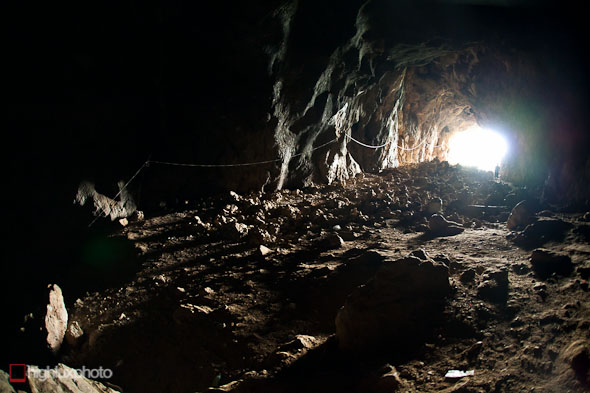 Tham Piu cave. Over 300 people were living in here semi-permanently to escape US bombing. 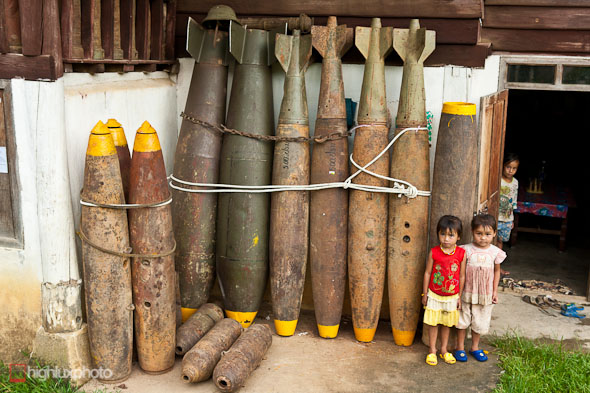 Defused UXO (mostly US 1000lbs bombs) outside a house in Xieng Khouang. Over 30% of the bombs dropped on Laos by the US failed to explode – leaving literally millions of items of ordinance (many of them tiny mine bomblets from cluster bombs) sitting in villages, buried in rice padddies, and scattered over the hillsides. Casualties from UXO are estimated at 12,000 since 1973. A substantial industry in scrap metal has arisen from the abundance of recoverable (but still fused) bombs, both due to its relative lucrativeness (compared with growning rice), and also out of desperation, as thousands of hectares of land has been rendered unfarmable until cleared of UXO. Once defused, much of this war scrap is also put to practical use: cluster bomb casings are used as planters and house stilts, bomb cases for fencing and jettisoned fuel tanks converted into fishing boats. Evidence of this resourcefulness is everywhere in the Plain of Jars region. 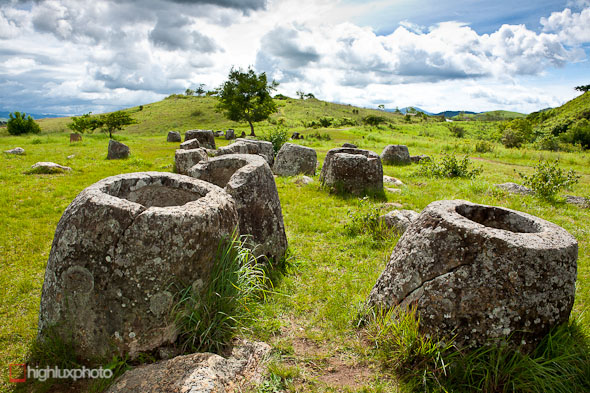 Plain of Jars Site 1. Of the 160 known jar sites, only three have officially been cleared of UXO. You can check out all three in a day. The jars are still shrouded in mystery. They have unclear origins and scientists have only been able to speculate about their purpose – most likely funerary urns, but they could have been for whiskey or rice storage also. The largest jar at this site weighs 6 tonnes, with most of them checking in at 600-1000kg. 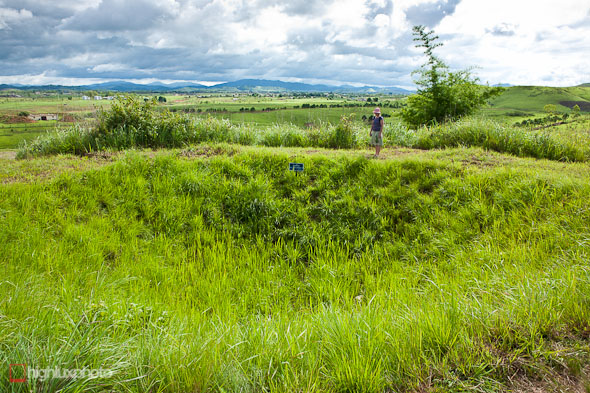 Much of the landscape is still cratered from the bombing campaign, this one at Plain of Jars site 1. 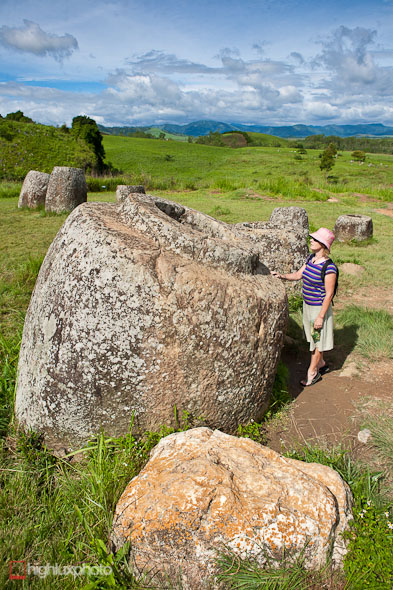 The largest of the jars at Site 1, Plain of Jars. 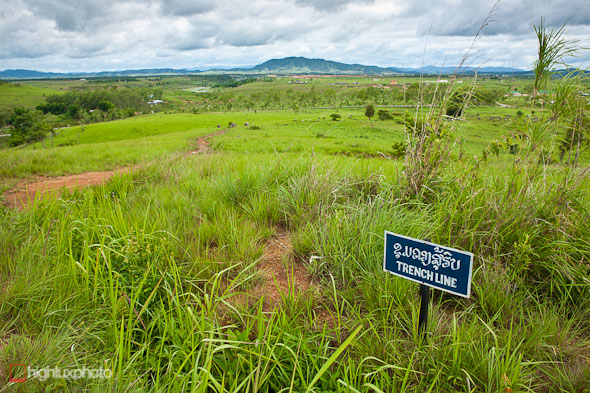 More evidence of war: this trench from Royal Lao and Pathet (communist) Laos ground battles. The Plain of Jars held particular strategic importance as it was via this mountain-ringed plateau that North Vietnamese and Pathet Laos forces would have to pass to occupy the Laos capital, Vientiane. 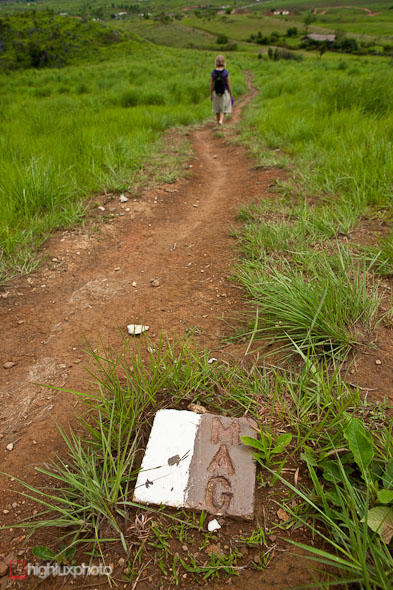 MAG – Mines Advisory Group is a UK NGO operating in Lao to clear mines, cluster bomblets and unexploded bombs from Laos. Safe corridors, such as this one at Plain of Jars Site 1, mark the UXO cleared areas – stay inside the white markers and you’re ok! 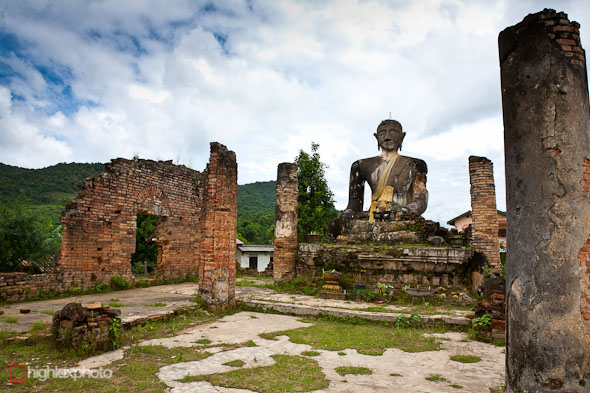 The town of Muang Khoun south east of Phonsavan was all but destroyed during ground battles, and this war damaged buddha at the remains of Wat Phia Wat there stands as silent testament to the destruction. 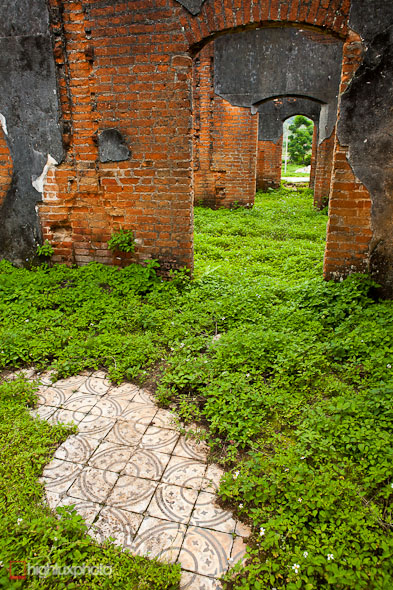 This building, also in Muang Khoun, was a French colonial hospital – destroyed during the 1964-73 war.

An ancient stupa That Phoun, at Muang Khoun. 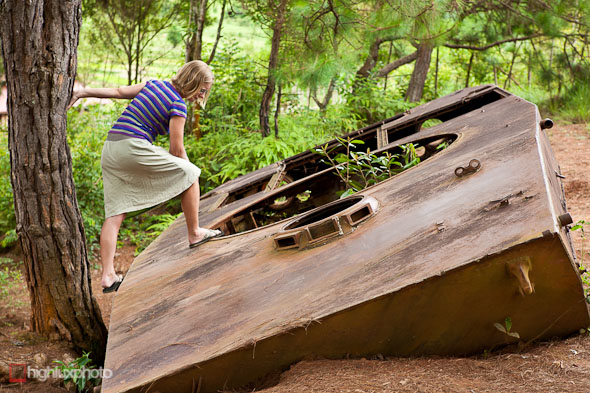 Remains of a Russian-built tank (its turret was down the bank below), on the road between Plain of Jars sites 2 & 3. Both Russia and China supplied arms and materiel in support of the Pathet Laos and North Vietnamese communists, while the USA secretly supported the Royal Laos Army. 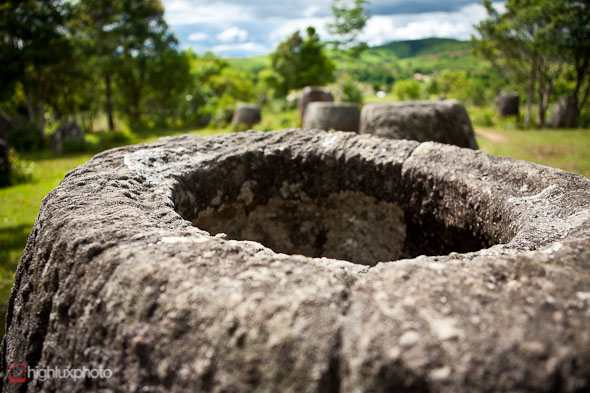 Jar at Site 3. Some of the Plain of Jars sites have quarries nearby, where blocks for the jars could be cut, but many of them now lie miles from their source rock. How were they transported? 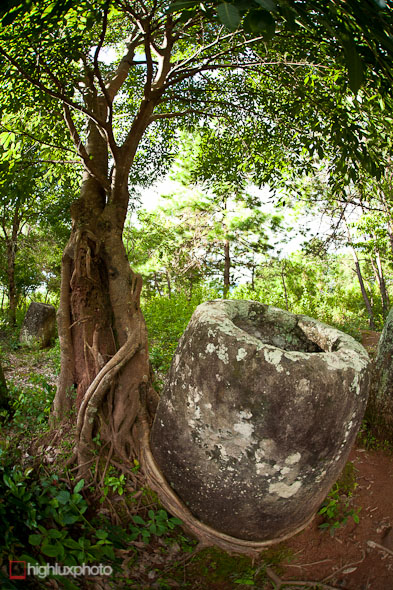 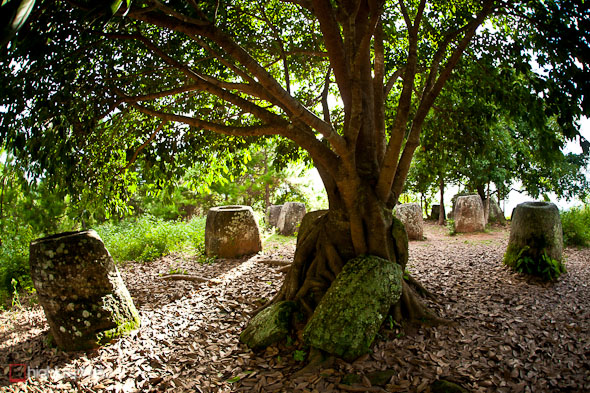 More Site 3 Jars – these ones lucky to survive the US carpet bombing. Many were destroyed. 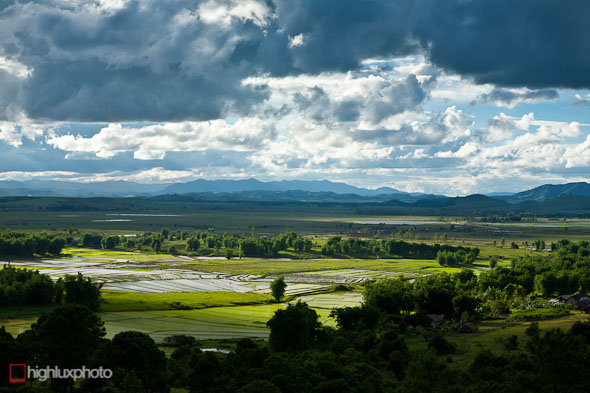 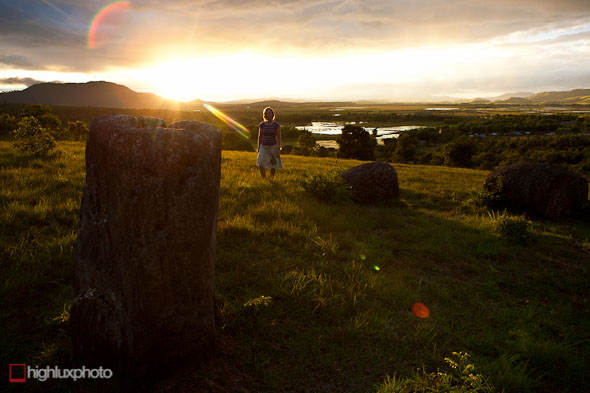 Sunset at Plain of Jars Site 2 – an awesome hilltop spot, with great views, but only a few jars. 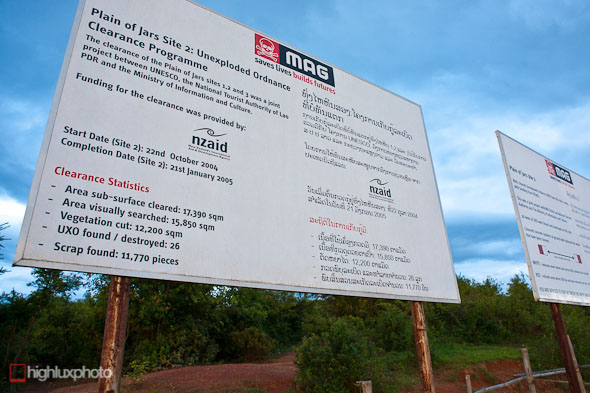 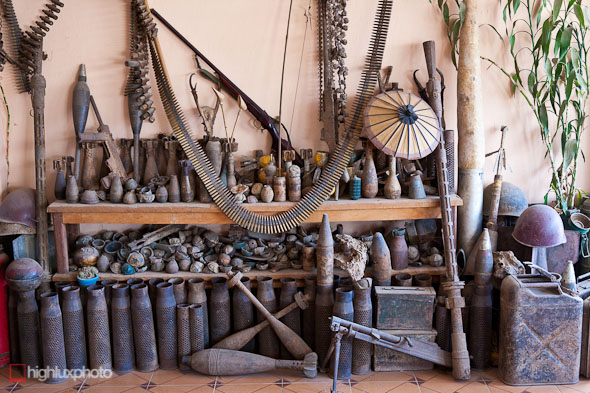 Collection of war scrap and military relics at one of the guiding businesses in Phonsavan. Many shops and businesses there display collections like these.