A day out on the DMZ 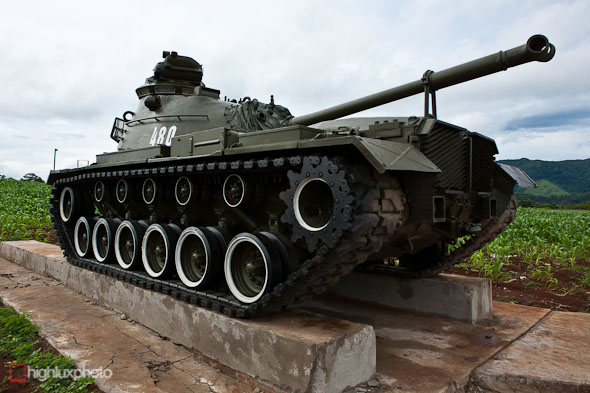 Having an interest in military history – well history in general really – our pause in Hue offered a good opportunity to do a tour of Vietnam’s DMZ, the Demilitarized Zone that is.

The DMZ, a focal point of the Vietnam War, formed the division between North and South Vietnam after it was – supposedly only temporarily – partitioned at the Geneva Convention in 1954. Vietnam’s DMZ provides a historical reference point in a similar way to the partitioning of Germany after WWII and provides a strong point of interest for tourists.

The boundary between these two zones was established at the Ben Hai River, which enters the South China Sea at 17 degrees 0 minutes 54 seconds N latitude. The boundary followed the Ben Hai to its headwaters, about 55 km WSW, and thence to the Laotian border.

The area within 5 km on either side of the border was declated to be a demilitarized zone. Troops of both governments were barred from this area.

It was this division that formed the basis for the Vietnam War (or the American War if you’re Vietnamese), as the more aggressive North Vietnamese attempted to push their communist convictions south and create a unified socialist country. The USA, who were hoping to quash the communist tide in SE Asia, stepped in in an ‘advisory’ role to aid the South Vietnamese, and after various inflammatory engagements took place in the early 1960s, furthered their involvement with a massive commitment of combat troops to the region. The rest, as they say, is history…

In truth, there’s not actually a lot to see among the DMZ and the former battlefields of the Quang Tri province nowadays; most of the rusting tanks are now long gone, the scattered ordinance destroyed, the bomb craters filled, and the wastelands planted with rubber trees – but for those keen to get an insight into the wheres and hows of this chapter of history, there’s enough to satisfy your curiosity.

Large group tours are available in Hue for as little as US$15, but they are reportedly pretty average, a very long day on the bus, and not very educational. We opted (it was my birthday present) for a private tour via the Stop and Go Cafe in Hue (US$104), and started the day at 7am when our Vietnam War veteran guide Mr Loc and a driver picked us up from our hotel. Spending the day cruising around in an air conditioned car after a couple of hot, sweaty days on the bikes was quite a nice way to relax.

Now to the tour… 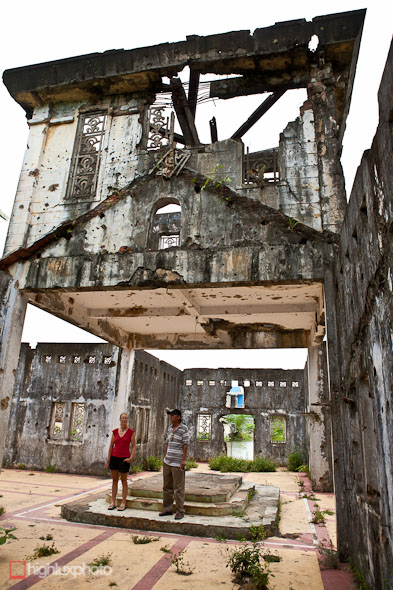 Our first stop on the DMZ tour was Long Hung Church at Quang Tri, on highway 1 between Hue and Dong Ha. The village was the scene of 81 days of fighting in 1972 when four divisions of North Vietnamese soldiers (PAVN regulars) attacked the region in an action known as the Eastertide Offensive. The city suffered prolonged shelling prior to the seige and was then bombed and shelled relentlessly by South Vietnamese and US forces in their bid to oust the PAVN. 5000 South Vietnamese soliders died retaking it in brutal street fighting. 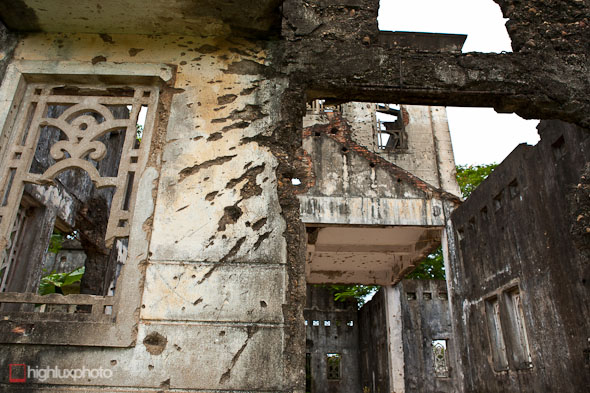 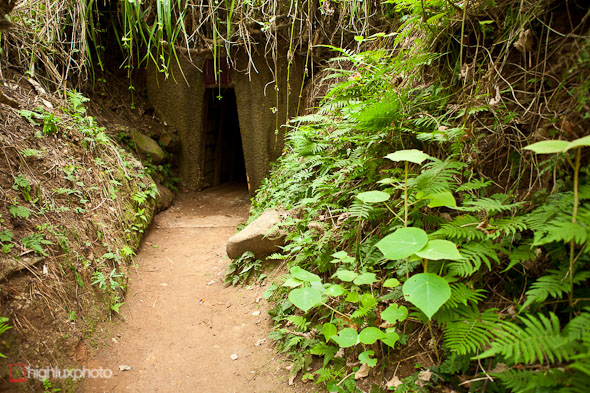 Next we crossed the Ben Hai river (the dividing line of the DMZ established by the Geneva Convention in 1954) to go and check out the Vinh Moc tunnels; a three-tiered network of tunnels established by the North Vietnamese in order to survive a prolonged US bombing campaign that started in 1966. The tunnels are 2.8km long and housed a substantial Viet Cong base, along with civilian families. According to the notes in the Lonely Planet guide 17 babies were born underground here. For a small entrance fee you can check out the whole complex. 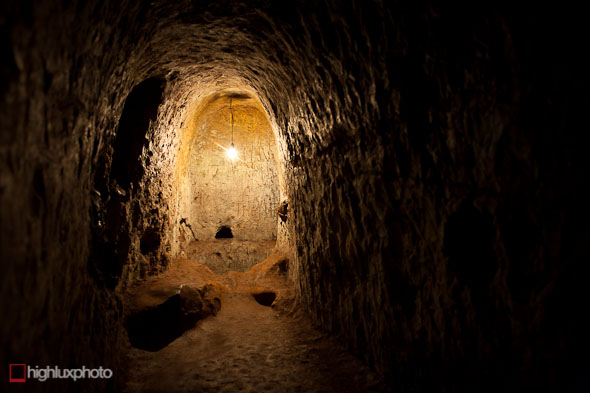 The tunnels, which are on a coastal hillside, are dug into a hard red clay and have survived just as they stood during the war. Inside we saw small bays where families slept on bamboo bunks, planning rooms, a hospital bay, and weapons storage areas. The area was constantly bombed (the surface is covered in craters) but the tunnels themselves were never discovered by the US. 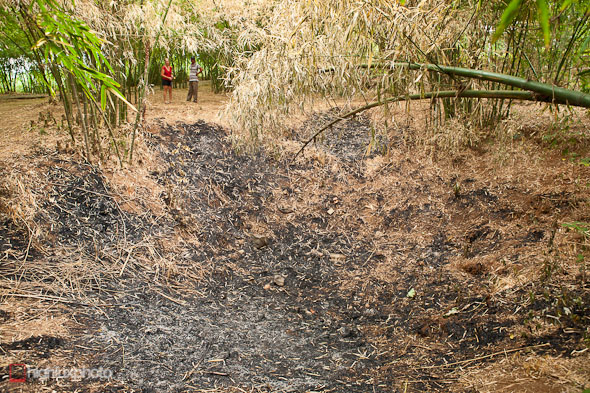 Bomb crater on the surface, just a stone’s throw from a tunnel entrance. 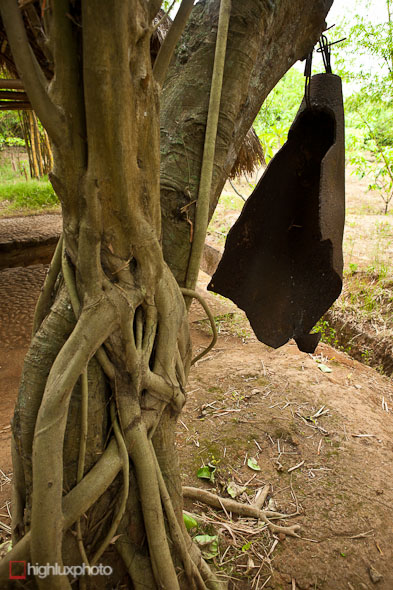 This bomb fragment was used as an air raid warning bell. 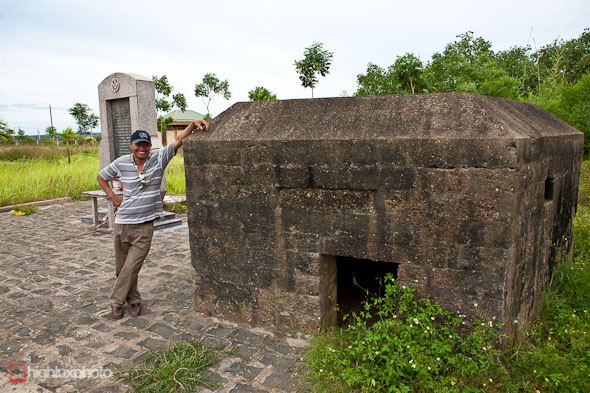 Still on the old North Vietnamese side of the DMZ we checked out an old French bunker at a memorial site by the old French bridge. That’s our guide, Mr Loc in the picture. He’s a veteran of the war and as a 17-year-old worked as an aircraft technician for the South Vietnam airforce, only serving for a short time before the fall of Saigon in 1975. His English was a little shaky, but he gave us passable overviews (we expected a bit more for the price we paid) of the sights and looked after us well. 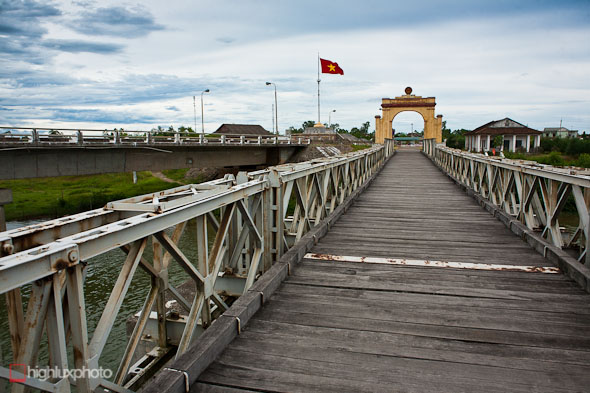 Looking across the French-built bridge towards the old North Vietnam. The bridge was damaged by US bombing but has been rebuilt. The arch is a memorial to Ho Chi Minh – founder of the Vietnam communist party and leader of North Vietnam during the war. 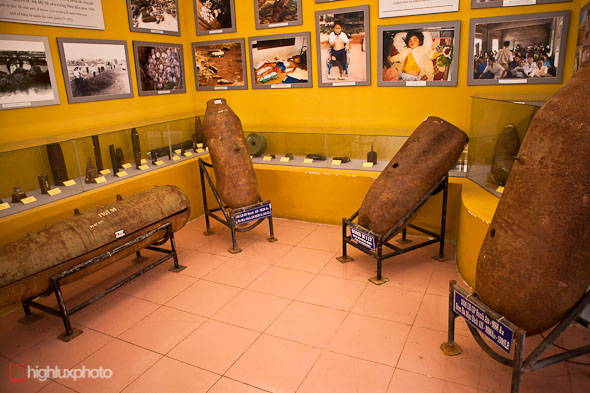 A small museum on the North Vietnamese side of the bridge contains a good collection of photography from the war, as well as various items of unexploded ordinance, arms, monitoring devices and wreckage from crashed aircraft. 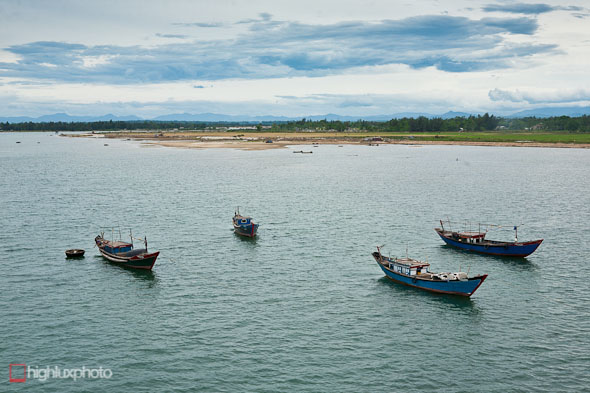 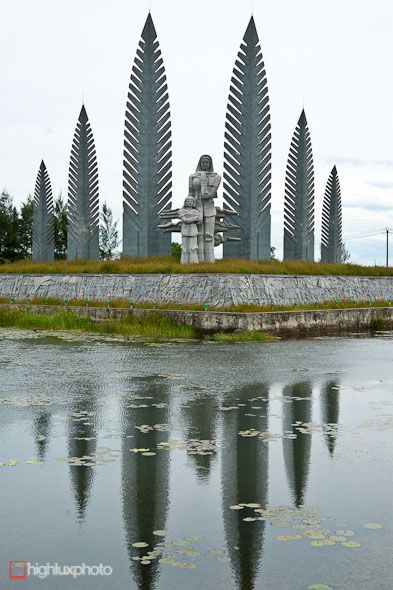 Modern memorial on the south side of the bridge – it depicts a mother and daughter awaiting the return of their husband and father from the north. 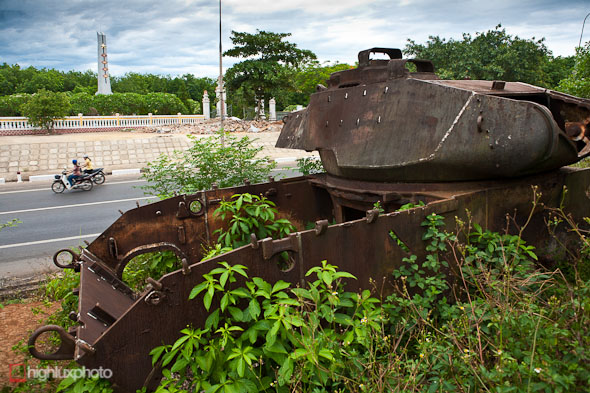 South of the DMZ the US established a chain of bases to protect the frontier of South Vietnam. The bases were part of a sophisticated electronic monitoring system called McNamara’s Wall and ran pretty much west to east along highway 9. Bases at Lang Vei (mentioned in this post), Khe Sanh (we’ll go there later), Con Thien and Doc Mieu were all part of this front line defense and monitoring to prevent North Vietnamese infiltration.

This shot’s taken at the site of the Doc Mieu Base. All that remains there now to tell the tale of war is the shell of a rusting American tank and a huge North Vietnamese war cemetery over the road. 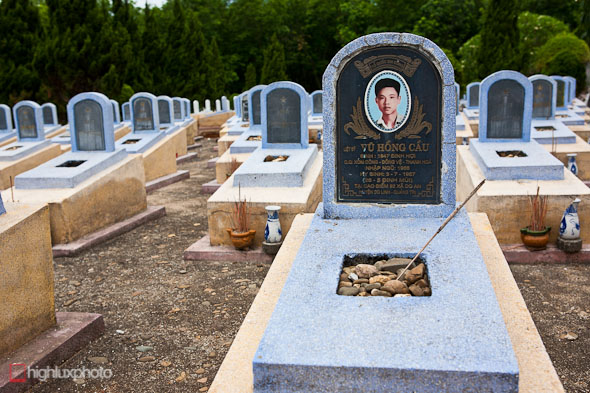 The cemetery is a chilling reminder of the human face, and cost, of the war. 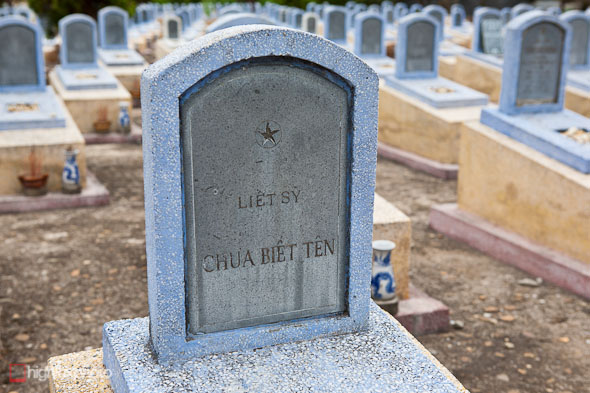 This grave reads Liet Sy, or Martyr, and contains the remains of an unidentified soldier. 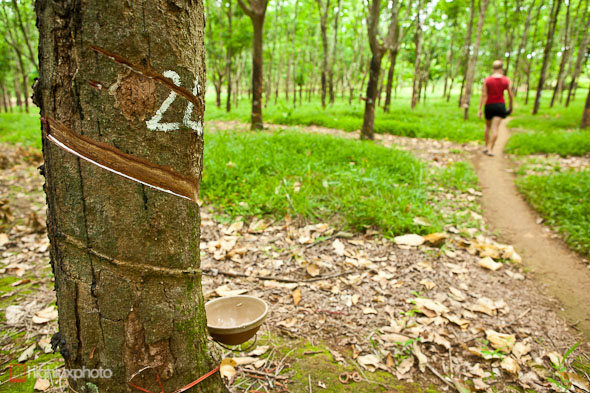 Con Thien Firebase was the north western anchor of the McNamara Line. It sat on a low hill overlooking the coastal plain and was the scene of constant fighting from 1968-1969 between the PAVN and US Marine Corp personnel stationed at the base. The surrounding area was devestated by artillery and bombing, and now that the UXO has been cleared the slopes of the hill have become a rubber tree plantation, like many other battle sites in this area. 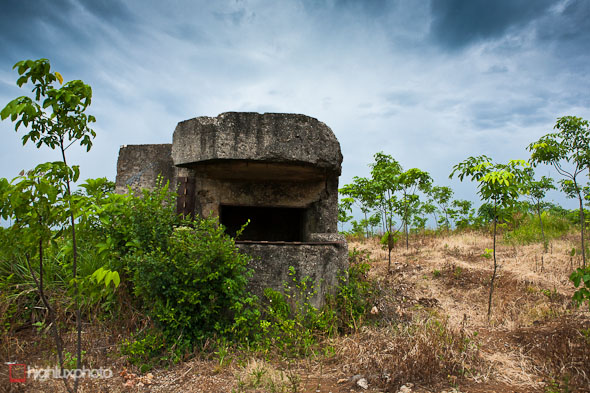 All that remains on the hill top now is this shell-scarred bunker. After the war there were several left here but they have been destroyed by local people to recover the reinforcing rods as scrap metal. Con Thien was intended to be used as a base for the McNamara Line to prevent NVA infiltration across the DMZ.

The firebase was strategically important because it offered unfettered views for 15 km east to the coast and north into North Vietnam. It was also very vulnerable because it was within range of NVA artillery north of the DMZ. Accounts I have read from marines stationed there report that they were shelled daily. In the year from March 1967 to February 68 nearly 1500 US Marines and 7500 North Vietnamese died in fighting in the vicinity. 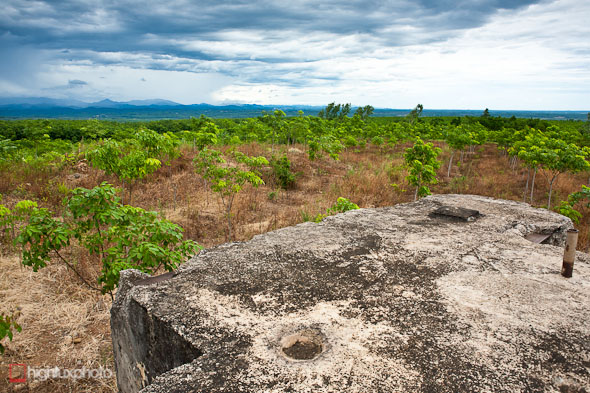 View from the bunker top looking north towards the DMZ. 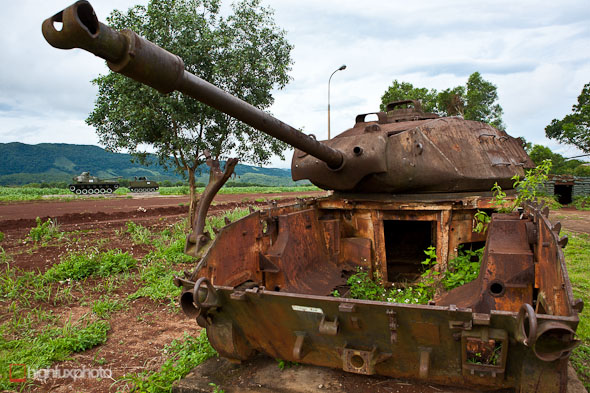 After a long drive into the hills along highway 9 we were back at Khe Sanh, but this time to visit the site of the Marine Corps base that was once here.

Now surrounded in coffee plantations and low lying scrub, the exposed plateau of Khe Sanh and the surrounding hills witnessed one of the largest battles of the Vietnam War when the base came under a prolonged seige by North Vietnamese forces in 1968.

After a series of hill fights in the area starting in 1967, US commanders became aware of the buildup to the seige, and fearing a repeat of the scenario at Dien Bien Phu where the French suffered a resounding defeat during the 1954 Indochina War ensured a massive buildup of US personnel and hardware at the base.

The seige began as a small scale assault in January 1968 and over the following two months the base was subjected to continuous ground attacks and artillery fire. The US responded with prolonged bombing to repel the North Vietnamese forces, of whom 10,000 were killed. Ultimately the siege was a failure, and in July 1968, Khe Sanh was abandoned anyway – the US Army reportedly citing the vulnerability of the base to enemy artillery! 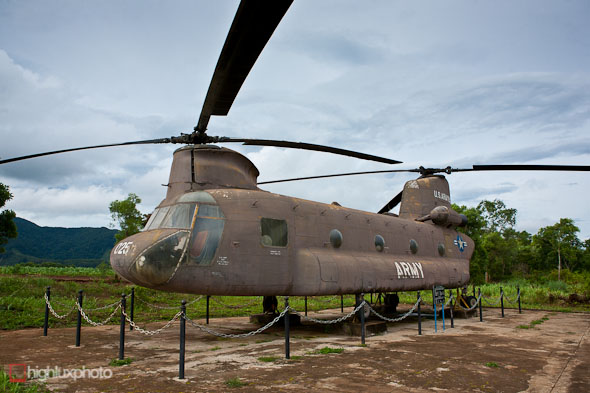 Today the area of the base features the remnants of the airstrip, a small collection of tanks (some restored, some rusting) and aircraft and a small propaganda-heavy museum. It’s unspectacular – but well worth the visit if you are passing through or are historically inclined… 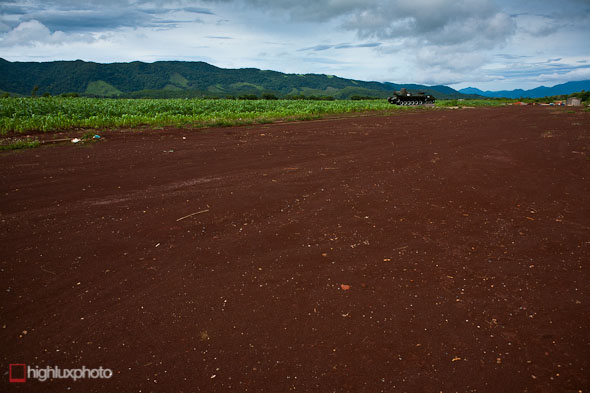 The airfield at Khe Sanh. Apparently nothing will grow on it to this day. 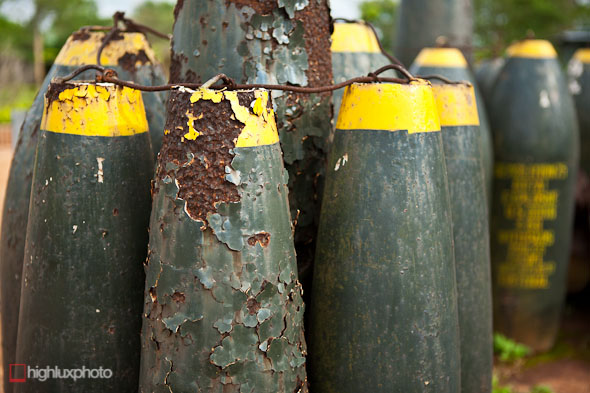 There’s a few rusting bombs and shells on display too. 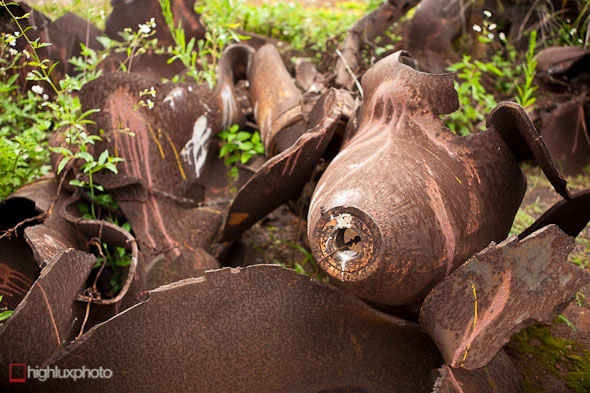 Along with a large collection of twisted shrapnel from the 100,000 tons of bombs the US dropped in the area. 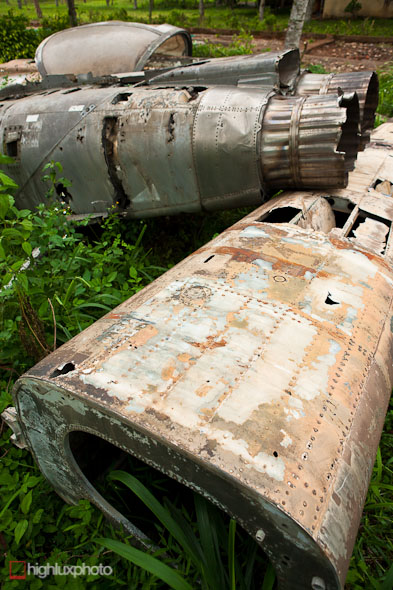 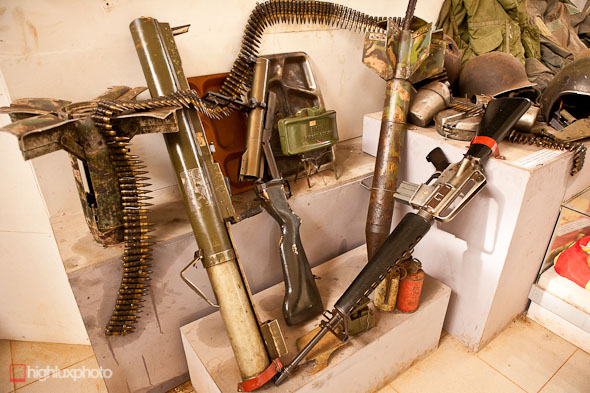 The museum has a good collection of weapons and equipment from both sides of the conflict. 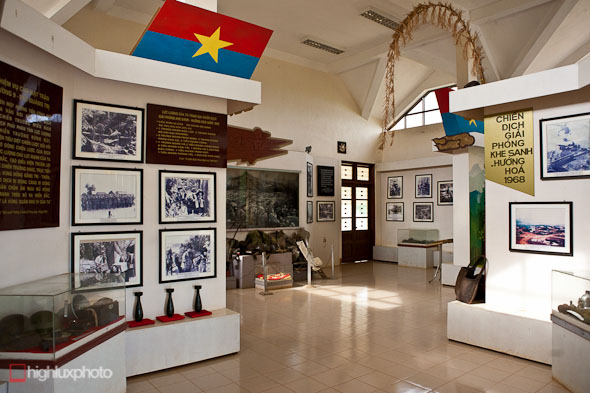 There’s a good collection of photographs to check out too. 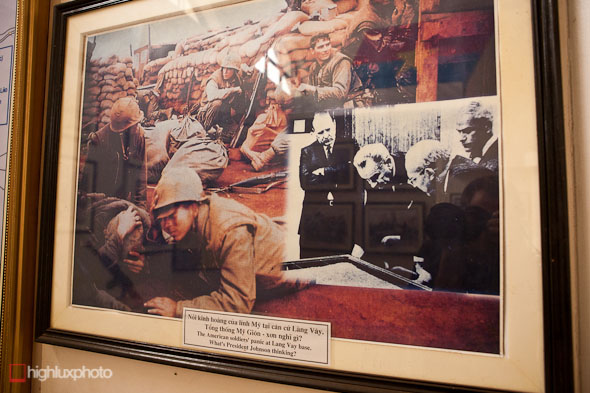 Excuse the poor photo, but I particularly liked this montaged image. The caption reads: The American soldiers panic at Lang Vay base. What’s President Johnson thinking? 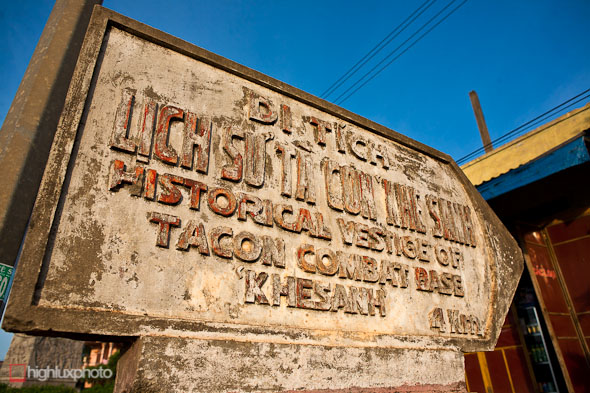