A quick update on our last couple of days in Cambodia as we head for the Thai border. 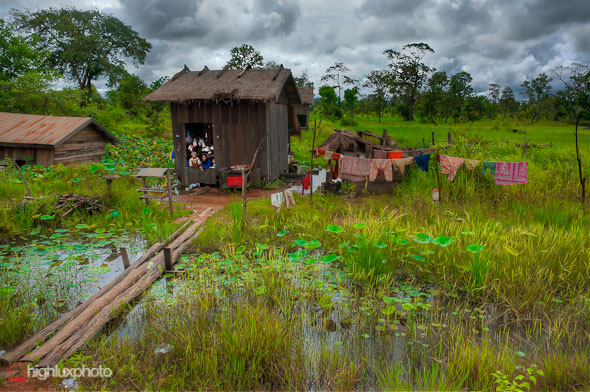 The wet season was well and truly in force in Oddar Meanchey province. We passed through a few tiny villages and past occasional huts like this one. On either side of the raised road bed the land was predominantly flooded. 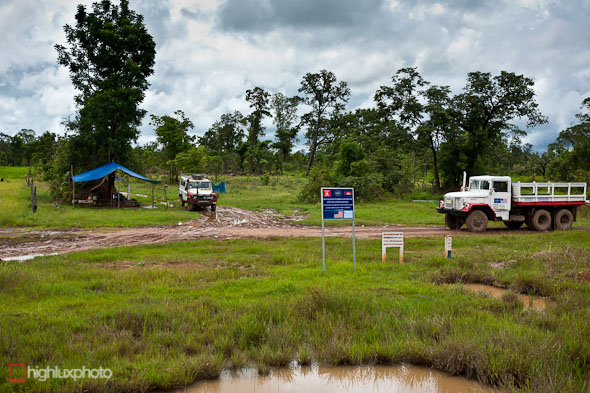 Headed west towards Anlong Veng and the Thai border we pass a landmine clearing operation. The entire 700km border with Thailand was mined during the Khmer Rouge years and it’s a huge, long term operation to remove them. 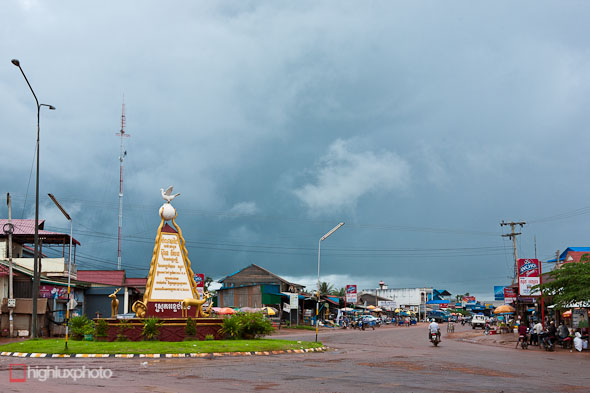 Anlong Veng was our last town in Cambodia before crossing the border. The town itself was notorious as one of the last hangouts of the Khmer Rouge’s senior leaders. Pol Pot himself lived in the hills not far from town so that he could slip into Thailand when necessary to escape capture. Ta Mok, one of the most notorious military leaders of the Khmer Rouge lived here also. After the regime was overthrown in 1979, Ta Mok remained a powerful figure, controlling the northern area of the Khmer Rouge’s remaining territory from his base here. He was arrested in 1999. The Dove of Peace roundabout, pictured here, is now the centrepoint of town. 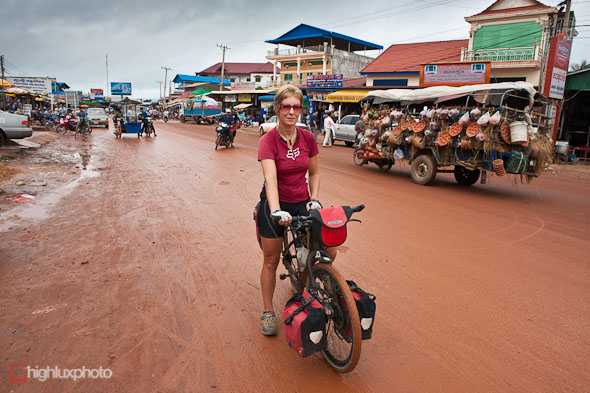 Heading out of town on our last day in Cambodia (auspiciously Hana’s fortieth birthday!). 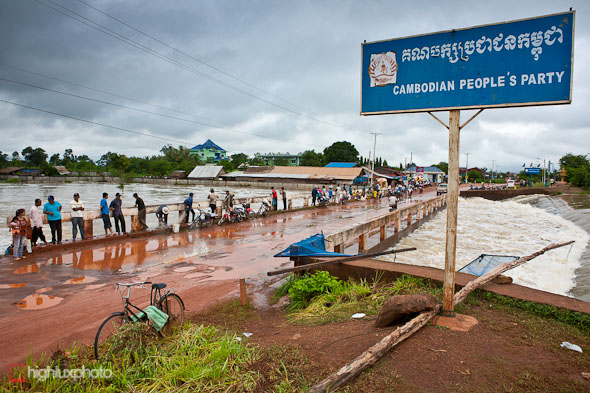 The widespread flooding meant easy fishing, so half the town had turned out at this wier to catch some dinner, or just hang out and watch the churning floodwaters. 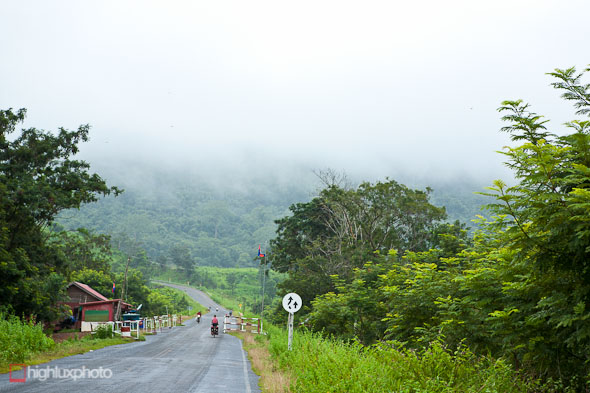 Passing an abandoned checkpoint as we head towards the Dankrek Mountains and the isolated Choam border crossing to Thailand. 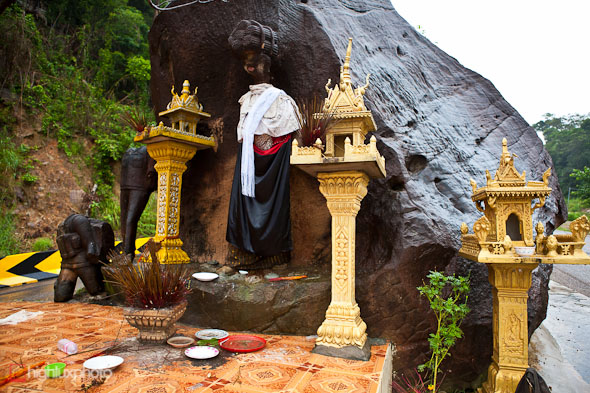 Partway up the hill onto the range is a sandstone boulder that the Khmer Rouge carved two heavily armed soldiers and peasant woman into. They’re smashed and headless, and site’s now a memorial for Khmer Rouge deaths, but it clearly represents the idealism and conviction that drove Cambodia’s communists. 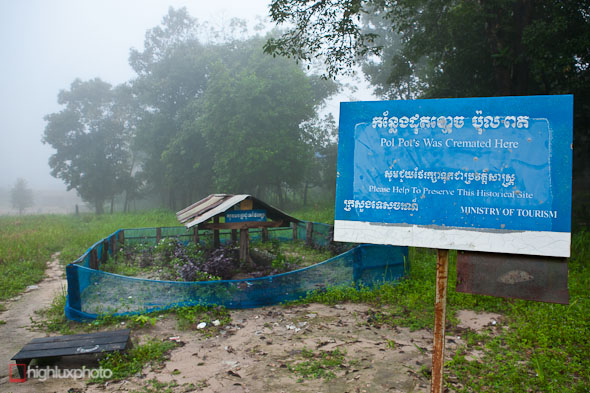 On the range top, not far from the border itself is Pol Pot’s cremation and memorial site. Pol Pot died nearby in suspicious circumstances in 1998. Unlike most of Germany’s Nazi past, the Khmer Rouge connections of this region are promoted for tourism; with signs marking sites and Ta Mok’s previous residence down in Anlong Veng open to tourists. 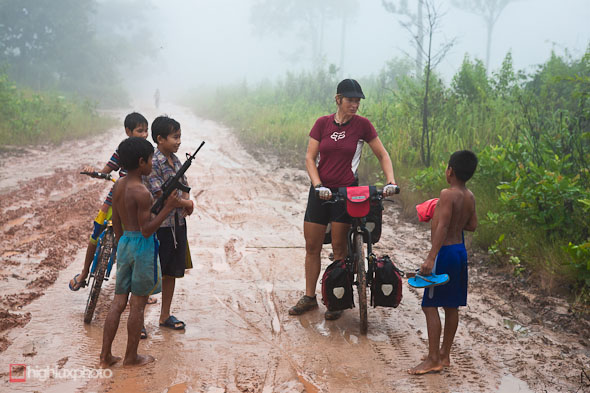 We’d hoped to bike some dirt roads along the range, before crossing the border, to see Pol Pot’s jungle hideout but the road was turning into a quagmire so we gave up after a kilometre. 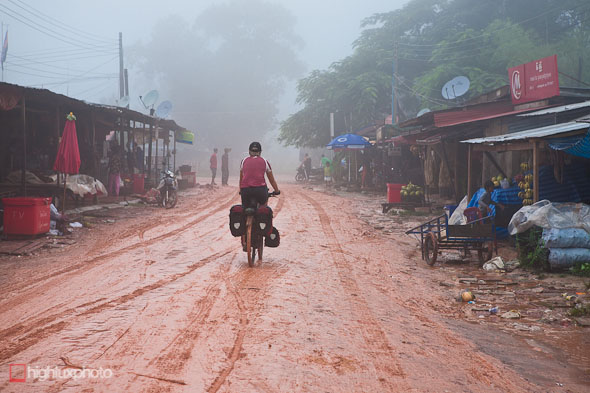 The Choam border crossing was bleak among the mud, mist and drizzle. The Cambodian side is cluttered with a rambling ‘smugglers’ market and people pushing handcarts back over from the Thai side stocked with cheap goods. We passed the border formalities smoothly and pedalled off down the hill into Thailand, looking forward to a new country and some pad thais…