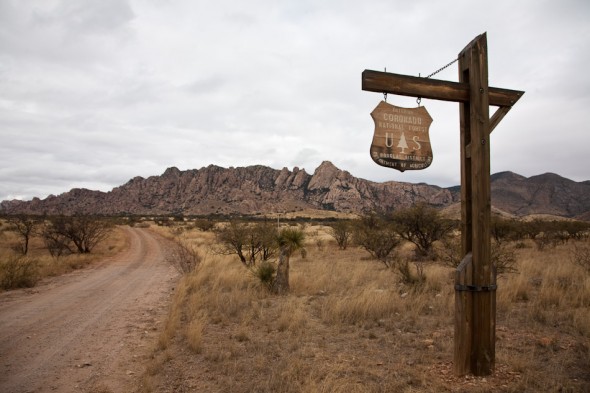 After spending close to a week in and around the cities of Phoenix and Tucson it was refreshing to hit the road and find a quieter spot to hang out for a few days. If you’re looking for ‘quiet’ Cochise Stronghold is the place to go. Located in the Dragoon Mountains in south-eastern Arizona (just a stone’s throw from the borders with New Mexico and Mexico itself), Cochise was once the hideout Apache raiders used to regroup after attacks on the Spanish and later the US forces in the late 1800s. It’s easy to see why they chose this spot: myriad granite pinnacles, massifs and boulders, caves and canyons form this range and when you can’t even find the peak you’re looking for, it’s easy to imagine the place swallowing a tribe. No worries. 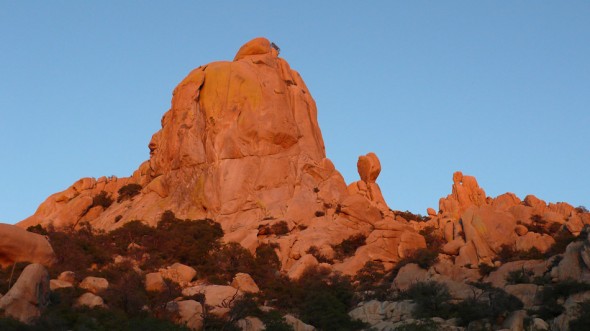 Cochise consists of West and East sections, and we hung out at West for four days (though it felt like longer). 20 miles of unsealed road carry you into the trailhead for the West Cochise climbing area, and the camping spot is where the road ends. It’s basic compared to most places we’ve been in the US: no overnight charge, but no toilets or water either. Just what us jaded city escapees wanted. I gather the East Cochise camping area is more developed, but not by much.

We were lucky to have a Tucson-based climbing contact, Dave, who had invited us to join him for a first ascent on a formation he’d already added one route to. On our first morning Dave rolled into the car park at 6.45 am as we were still swallowing our breakfast, and as the day dawned we set off towards Squaretop – about an hour and a half up the hill. 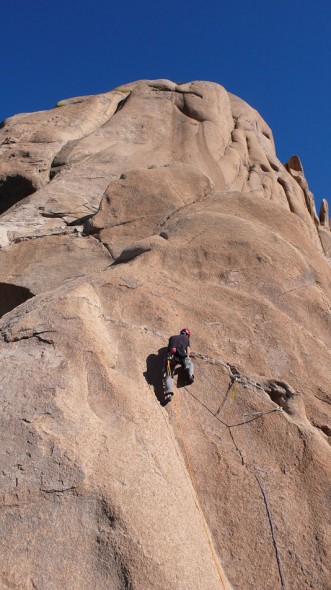 We spent an awesome day climbing a new 4 pitch line ground up. Dave is a very prolific new-router in the area and has a fast and efficient system for bolting on lead (I learned heaps from him), and was also happy to share the lead – giving me pitches 1 and 3. By about 4 pm we were on top of Squaretop, with 4 new pitches (9, 10a, 10a, 7) and a few bolts behind us. The climbing was a mix of slab, open book corner and crack systems, with consistently interesting climbing and just enough pro. With the prevailing ethic for new routes in the Cochise area being ground-up, it was great to participate in that style – and contribute something to the area. 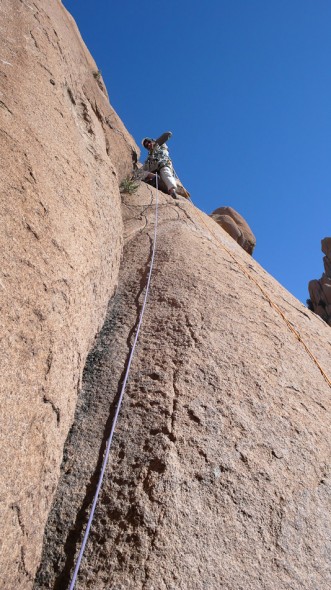 Over the following couple of days Hana and I climbed a couple of West Cochise classics, Moby Dick (5.7, 4 pitches) and the uber-slab climb Warpaint (10c, 5 pitches). Both routes were absolute quality. We spent the evenings hanging out round the fire with Calvin and Ben – a couple of chilled out Outward Bound instructors from North Carolina. (Thanks for sharing the fire and conversation!). 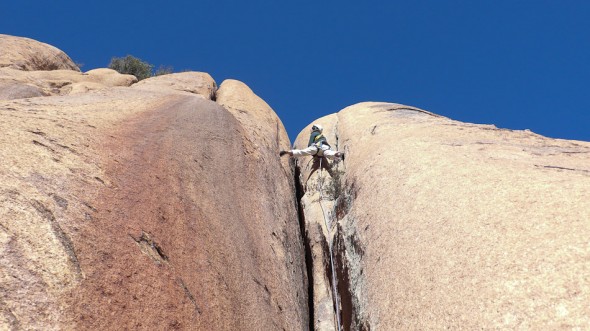 On our fourth and final day Dave rolled back into the car park again at 6.45 am sharp and he and I set back off up to Squaretop to try and climb a harder line we’d been eyeing up back on day 1. Dave dispensed with pitch 1 in good time, placing a couple of belay bolts at a stance below a 40m wall of largely blank slab and face climbing that linked into a short corner and crack system higher up, before finishing over a bulge leading to the top of pitch 3 from the previous climb.

Armed with the rack, Dave’s sky hooks, and a tag line to haul the drill and bolt kit when I needed it I gingerly set off rightwards on pitch two, on thin edges and smears. I stopped after just a few metres to place a bolt from a standing stance on small holds, and then committed to a few more metres of thin moves before placing a couple of sketchy hooks to hang from while I placed the next bolt. It’s kinda hairy placing hooks on Cochise granite as much of it tends to be a little flaky and loose first time round. I drilled the hole, while fully expecting the hooks to blow the tiny flakes off the face – sending me down the slab with the drill flying around my head. Dave hung stoically at the belay – hunkered down and shivering in the freezing wind.

With the bolt in, I set off from the stance and committed to a few more moves into blanker territory. I was trying to find a path: a sequence that would utilise the discontinuous features scattered over the wall. I pushed up and left into a steeper section of the wall; crimping like nothing else on dimples and crystals while I traversed my feet on tiny edges. Facing a big whipper, I made a few moves straight up, but came to an impasse – I was too gripped to make more moves into completely unknown ground, but didn’t see anything I could hook off for another bolt. 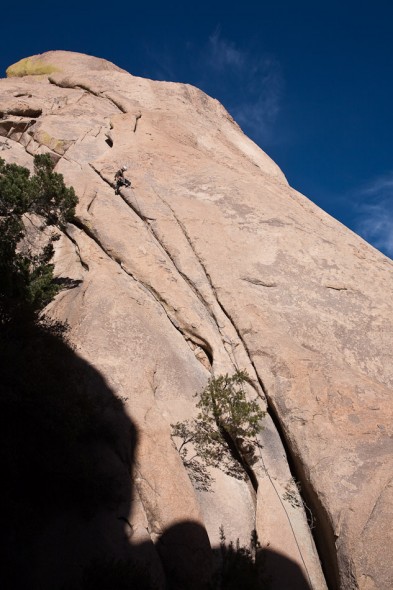 While my leg sewing-machined on a high foot hold, I wondered if the line would even go – under my hands and feet at least. I reversed a couple of moves to foot holds I could weight without having to milk my handholds so much, and decided to try the tiniest hook on a flat-topped crystal of quartz that was about the size of the nail on my little finger. Transferring my weight to it slowly, it seemed to hold (to my amazement) and I managed to put the other small hook onto a tiny ripple – making a equalised stance to drill from. Being careful to not unweigh the hooks, I hauled the drill from its position at my last bolt, and even more carefully than the last – drilled another bolt.

With this one clipped, I felt protected enough to push on and climbed back to my previous stance. Setting up, I moved into a sequence that I hoped would put an okay hold into reach. Squirming, stemming and crimping I stretched up slowly … until my foot blew and I popped off the rock. Without the bolt I’d just placed I’d have had an epic fall and been shredded. The fall blew off some tension too, and after lowering back to a no-hands stance I moved into the sequence more relaxed. This time I got the set up better and made a committed lunge to the hold, which turned out to unlock a series of moves into a big hidden pocket. Jug in hand and rope arcing down to the last bolt way below my feet, I rocked over on a foot hold and managed to get to my first decent stance in 4 bolts. I could almost get a no-hands rest, and with hooks on some better features, drilled my fifth and last bolt on the pitch. 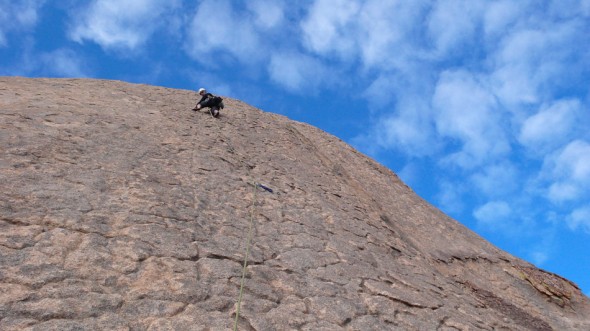 Ahead lay easier climbing up a short corner and into a series of cracks. I took my time, climbing carefully on the sometimes suspect holds and fiddling pro in. The steepening features linked up nicely and the difficulty eased back a little as I got higher. Finally I placed a suspect RP in a bottoming crack on the short headwall and set off into the finishing moves, committing to a dinnerplate-like flake. and bigger holds leading to the top. 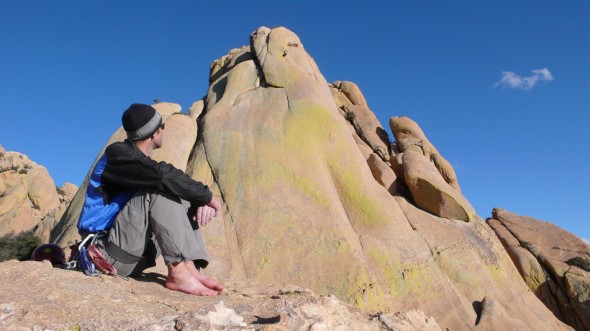 After about 2 hours on the pitch, balancing precariously in the wind gusts I was relieved to hit the sheltered belay niche. The pitch had been a challenge in perseverance and as I sat at the top, bringing in the rope as Dave climbed, I felt deeply satisfied with the effort it had taken. This style of ground-up climbing challenged my psyche in an insightful way. I’m looking forward to more.
‘That’s as good as anything in the Stronghold!’ Dave remarked as he topped out the pitch. We were happy with the line and stoked with the high quality climbing. We sorted the ropes, drill and bolt kit and Dave set of up the last pitch – a lower angled and feature-studded slab. Drilling 3 bolts and placing a small amount of gear he topped out the pitch after about 20 minutes and I followed the pitch as the wind whipped into a fury.
Rapping off was a minor nightmare of wind-blown ropes and loops catching on flakes, but finally we hit the more sheltered base of the wall. 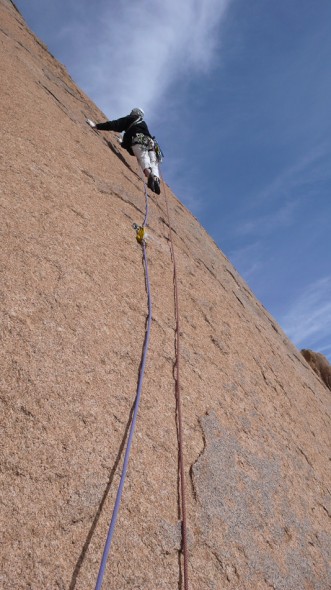 Coschise Stronghold had given us four very memorable days. Off the beaten track, and with limited information (a new guidebook is due out soon), Cochise is not a mainstream destination – but it offers a unique climbing experience on hundreds of routes scattered around its Dali-esque formations. There’s a lifetime’s worth of new routes to do still too – everything from short and steep too long and winding slabs. Check it out if you’re looking for an adventure.

This is my last post from the USA after 7 incredible months on the road in Canada and the Western US. We’ve seen and done tons, had some unforgettable adventures, and learned loads – now it’s time to take a holiday from our holiday and check out Mexico for three months. We’ll report back soon! 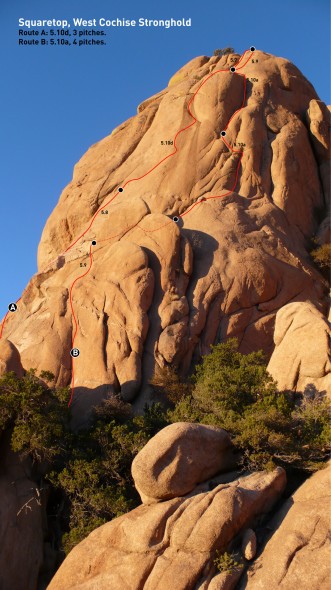