Steeped in history, rich in biodiversity and complicated in topography, Colombia is a bikepackers’ paradise.

A network of peaceful rural and backcountry roads traverse this country, crossing Andean passes, jungle clad hills, riverine lowlands and everything in between. The country’s incredibly varied terrain means that you can be riding in alpine conditions one day and lowland humidity the next – keeping a tour in Colombia continually interesting.

Colombia’s proximity to the Equator and its positioning between the Pacific, the Caribbean and the Amazon result in extraordinary plant and animal diversity; the birdlife, in particular, being amazing. Varied too is the culture of this country, with its pre-Columbian and colonial history, combined with a diverse peopling.

Many cycle tourists stick to Colombia’s more arterial routes, but in exploring via our circuitous route and with a few tips from locals we discovered there is so much more to this country than the standard travel guide highlights.

Scroll down for map, GPX and further information. 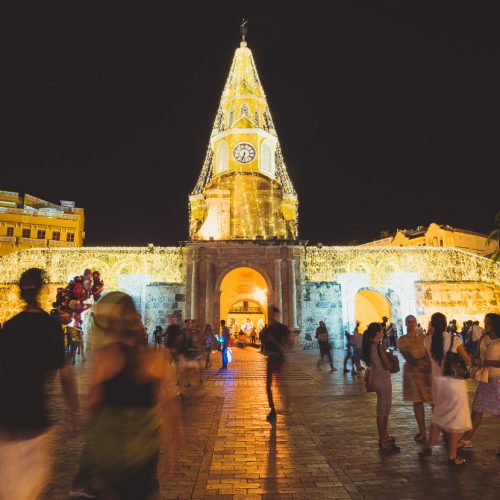 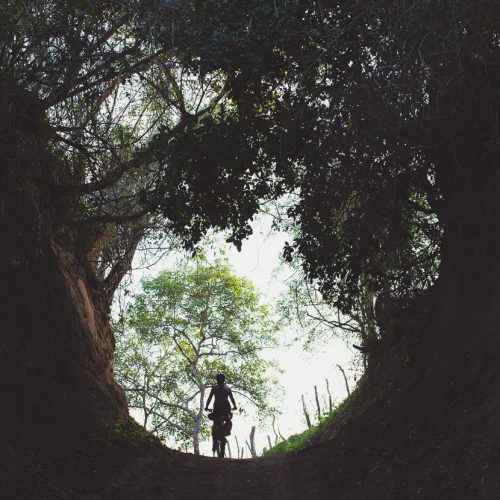 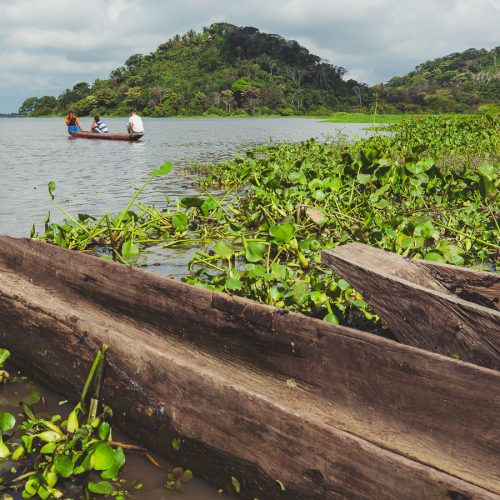 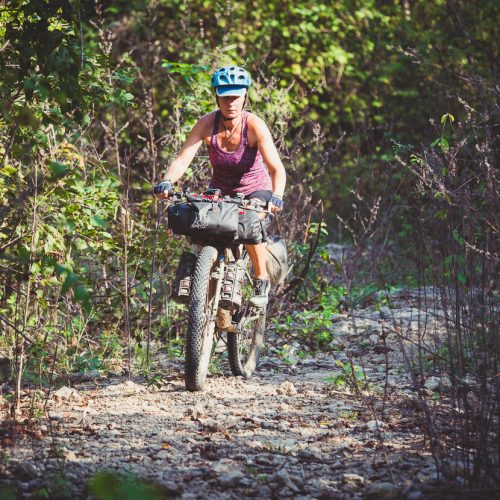 A brief summary of the highlights along this route. More details and specific places are noted in the POIs in the track. Click on the titles and hyperlinks to read relevant blog posts.

The Walled City, fortified by Spanish colonialists to protect their riches plundered from the New World. Bathed in Caribbean sunshine and humidity Cartagena is a gem, full of history, great food and a tropical vibe. The old centro is the place to be, with its maze-like streets, beautiful buildings and sunsets from the top of the wall.

After a day or two of highway, the route turns into a series of dirt roads (and even some singletrack!) at El Carmen de Bolivar as it makes its way into the lower Rio Magdalena basin and towards relaxing, historic Mompox. This geographically complicated wetland is full of birdlife, iguanas and peaceful, easy riding. Small ferries called ‘Johnsons’ cross the many river braids and help you link together the roads.

Your legs will be getting used to the climbing by the time you reach the white colonial town of Girona, basically a suburb of Bucaramanga. But that’s just the warm up as the route hits the Andes proper; climbing into the mountains towards charming Zapatoca and a series of interesting villages as it makes its way to Barichara, said to be the most beautiful colonial town in Colombia.

The ride really steps up the scenery and diversity as it heads onto Dean & Dang’s Oh Boyaca bike packing route, the zenith of which is the alpine region around Sierra Nevada del Cocuy. Here you’ll encounter unique frailejone plants for the first time and a string of remote mountain towns, each with their own character.

Our second favourite colonial town in Colombia, Villa de Leyva is popular with local and foreign tourists alike and will be a welcome sight after the wilds of the Oh Boyaca route. After a good rest you’ll be ready for the long climb over to Florian. While the town is non-descript, the Ventanas de Tisquizoque – a giant cliff-side cave across the canyon is an amazing sight and makes an easy walk from town. It’s a hard ride from here to Suesca, but the scenery is epic as you ride into and out of the canyon leaving Florian.

Suesca is a nationally important rock climbing area and has a couple of choice cafes and restaurants to cater for climbers and hikers. It also makes a good base for a bus trip to Bogota (1-2 hrs) From here the route trends east towards the Western Cordillera and the Zona Cafeteria, crossing the central mountains on the way. This section of the ride is characterised by very quiet riding on paved and dirt roads through a very lush (and sometimes steep!) landscape. The charming town of Guaduas is a particular highlight.

From a baking hot crossing of the Rio Magdalena (don’t miss the buried town of Armero), the route gains over 3800m of elevation, climbing to high on the flanks of Nevado Ruiz, an active volcano. If the closed 4600m pass reopens, you’ll climb even higher, otherwise a detour to Manizales will be required. Either way, the Old Letras Pass route over Nevado Ruiz is a trip highlight. This is closely followed by beautiful Salento, a tourist town in the lush Zona Cafeteria. The highlight here (aside from the great food) is the Cocora Valley, for its improbably tall and slender palm trees. The route through the mountains between Salento and Ibague is a gem of dirt road riding, surrounded by verdant forest and remote farming country.

It’s not a pretty city but this megalopolis of 8 million is a melting pot of Colombian culture. Don’t miss the Museo del Oro, the vibrant street art and the sweeping views of the city and the Bogota Savannah from Monserrate. There’s also a thriving cycling scene and lots of high end bike shops.

From the densely populated to the very remote, the route leaves Bogota via the Eastern Cordillera and then drops all the way to the giant plains of Los Llanos and Meta Department on the fringe of the Amazon Basin. This region was largely controlled by FARC during Colombia’s protracted civil war and has only recently become safe enough for independent travel. That said, you’re not likely to see another tourist unless you pass through La Macarena during the (muddy) wet season, when the famous stream of Caño Cristales flourishes with vividly coloured plant life. Whatever the time of year, this is a special region to visit. We saw monkeys, tropical birds and all manner of remote settlements.

Once you have clawed your way back over the jungle covered Eastern Cordillera a medley of archeological sites awaits, and interesting countryside between, as the route weaves through tightly folded hill country rich with coffee plantations. Look forward to good food and hostel accommodation in San Agustin.

Sparsely populated country is the theme of the ride from here right through to Pasto, with the exception of Mocoa at the base of the famous Trampolin de Muerte road. From San Agustin to Mocoa is mostly pavement. Mocoa’s worth exploring for a day or two to hike to the well known Fin Del Mundo waterfall and the equally beautiful but less tourist-trampled Ojo de Dios. The Trampolin is a classic touring route, taking you from the rich greens of the edge of the Amazon up to the alpine grasslands surrounding Pasto. The road’s famously narrow, dirt and has epic views.

Most of this route is on quiet dirt roads that vary immensely in quality, with some sections (rarely more than a day’s riding) on pavement. On the occasion that the route is paved, the roads are usually very quiet (i.e. from a handful of traffic an hour to close to none). Some short sections are on either singletrack or very rough road and these are noted below. Sections of this route are mud-prone during the wet season, particularly the low country around Rio Magdalena (Canutalito and both west and east of Mompox), and in Los Llanos between Vista Hermosa and La Macarena. Check with locals and consider alternatives if riding during the rainy months, which are April-June and in some areas also October-November.

This route can be ridden on any sturdy touring-oriented bike, but is best with tyres of 2.2 inch width or wider. We recommend 2.4–2.8 for the most comfort and traction on the wide variety of road surfaces.

There is a huge amount of climbing on this route. Colombia is a mountainous country! Riders with a bikepacking approach, or at least a thoughtful approach towards weight savings will have more fun and labour less on the steep climbs.

Between KM 525-530, south of Arenal del Sur, the road gets very rough (after a section of nice single track) and would be hard work with a heavy load or skinny tyres. Consider detouring via Machosolo and rejoining the good road near KM 535 if heavily loaded.

The high pass crossing between park checkpoints (marked on the map as warning POIs) is currently closed to the public due to volcanic hazard. This status could change at any time. Email the park authorities for an update on the current situation.

Refer to Dean & Dang’s Oh Boyaca route on Bikepacking.com for POIs and further information for this section.

El Mirador (POI on map): Restaurant and tienda (open 7am – 8pm). Not much camping space, but there are sites above and below El Mirador if you are more than one tent. We camped on a porch outside a shop. 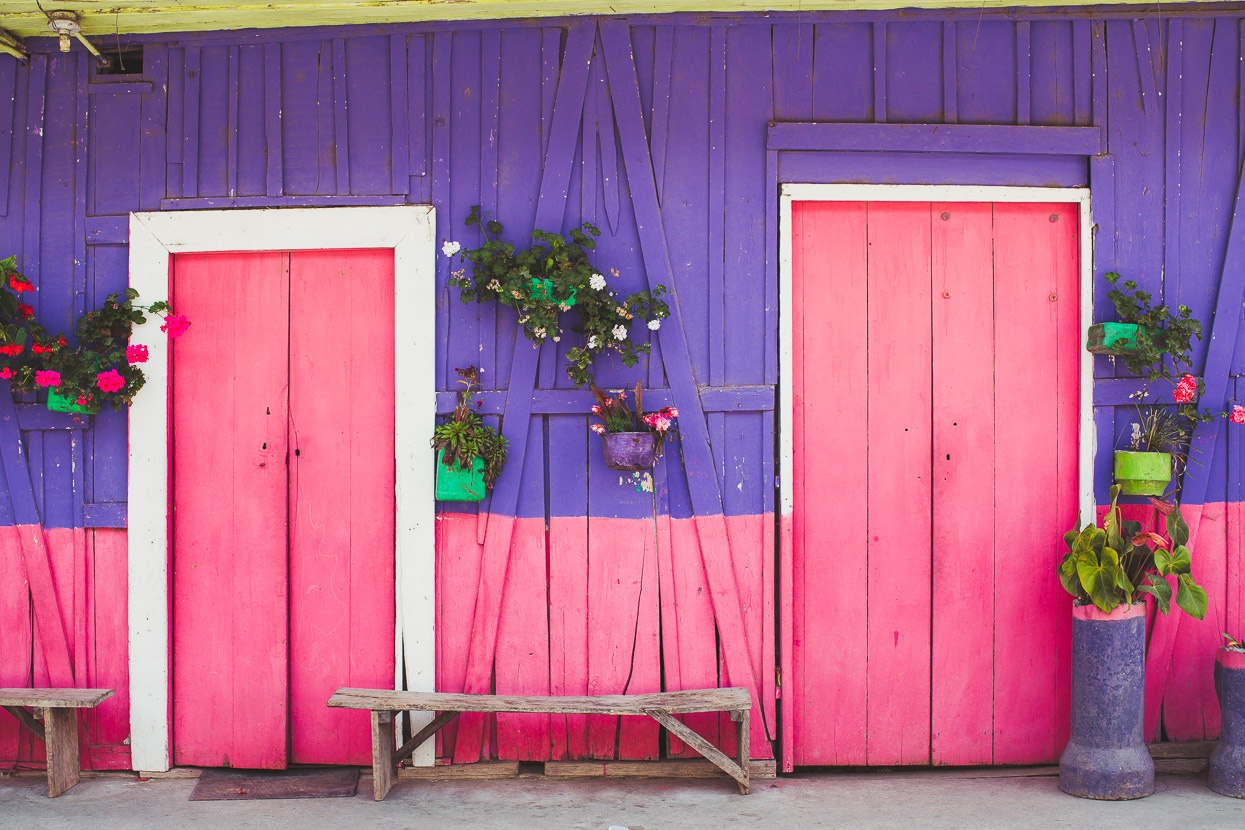 Web hosting and our Ride With GPS subscription (essential for joining and editing tracks) are both ongoing costs for us. Feel free to drop us a donation in return for using our track and information. We’ll be hugely appreciative!