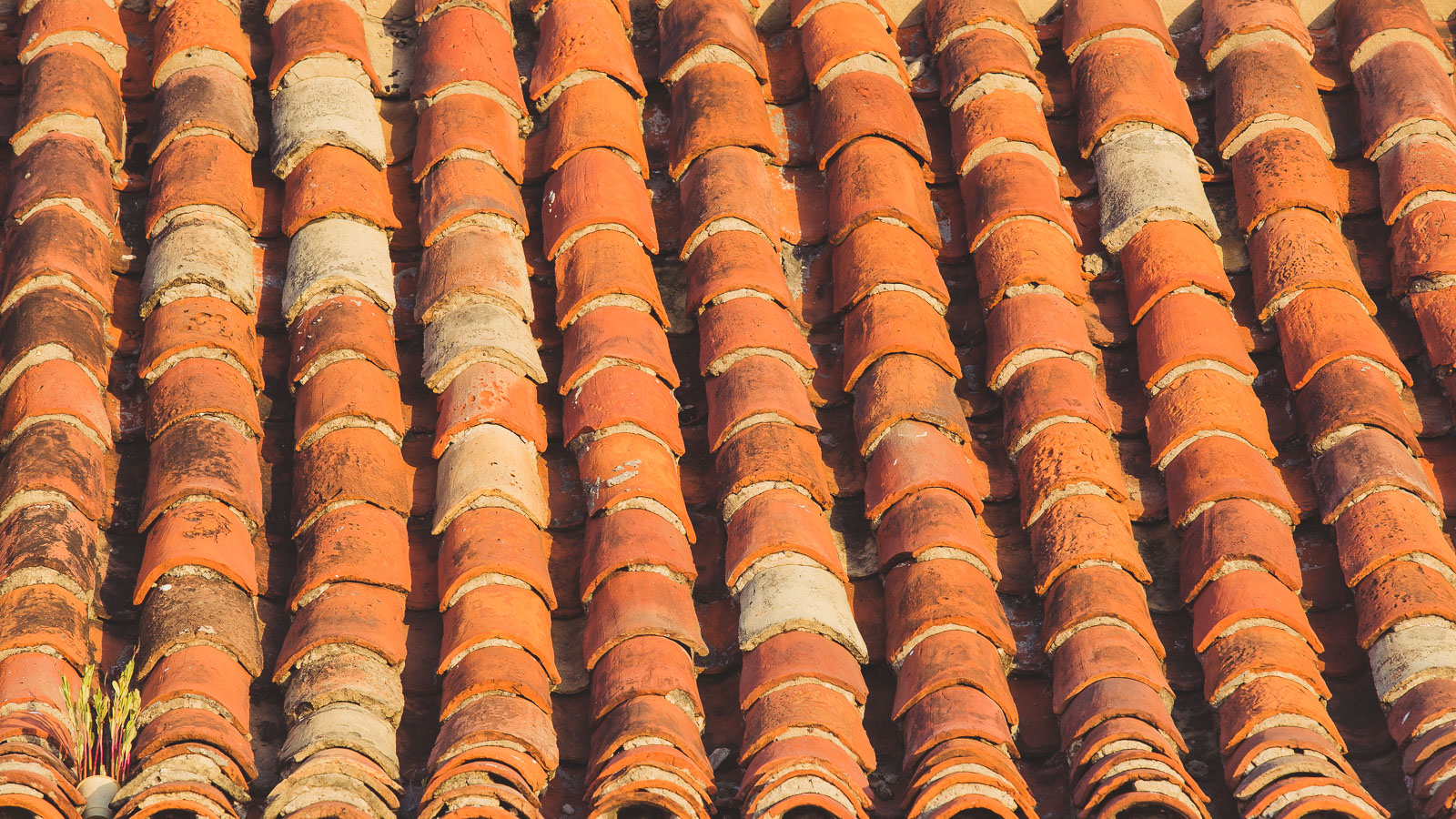 We arrived in Cartagena – one of Colombia’s most picturesque and famous colonial cities – just a couple of days before Christmas. Two flights from Havana had brought us here, legs still heavy from our long haul – with few rest days – on Cuba’s La Ruta Mala.

Speaking of legs, mine were covered in incredibly itchy flea bites – probably picked up from one of the many callejeros (street dogs) who make temporary friends with us. Lesson learned.

Cartagena’s most famous for its heavily fortified colonial centre. During its colonial heyday the Caribbean port was a crucial stop for Spanish galleons shipping their cargoes of silver, gold, cacao (chocolate) beans, chile peppers, tobacco and other bounties of the New World. The city was an obvious target not only for pirates, but also the English, who frequently battled with the Spanish for Caribbean territory and spoils.

Consequently, the entire city centre was walled with seven miles of defensive structure that contained numerous cannons, barracks and stores. Just outside the colonial centre and predating the wall, a impressive fort, Castillo San Felipe – in some ways reminiscent of Pre-Columbian temples – was built atop a hill during the 1600s. A place of commanding views and with an impenetrable air.

The early Spanish were not only ruthless in their quest for territory and resources, they were incredibly industrious.

Cartagena draws the crowds – especially during the Christmas/New Year period, so staying in the Centro (the old city) we were in the thick of it. Fresh from the empty shelves and socialist minimalism of Cuba, Cartagena’s wealthy ambiance and multitude of shops came as a shock to the system. Suddenly we had choice! We were very excited to walk around a supermarket – fondling the fresh fruit, gazing down aisles of tempting treats and feeling overwhelmed with the variety. Internet too was a novelty – no more sitting in a plaza limited to one hour of scratch card.

Hot night and day, breezy and vibrant with Caribbean charm, Cartagena was relaxing and exciting – for a while. Finally we were in South America for the first time in our lives, but we also had some urgent work to attend to on the bikes, which meant our intended week there dragged to two and a half weeks. Cartagena’s not a cheap place to be at that time of year either.

Hope Technology had agreed to come on board as a sponsor and sent us some hubs and headsets, so we needed a good wheelbuilder, but we had the issue of a cracked rim to deal with first. Back in Panama I’d noticed my rear rim (Stans Flow Mkiii) had multiple hairline cracks around the spoke holes. By the time we’d finished the Ruta Mala they were worse and the aluminium was starting to bulge outwards around the cracks. This was the second Flow Mkiii to do this on my bike on this trip.

We tried, unsuccessfully, to find a local replacement (wide 29er 32 hole rims are not common in Colombia) so ended up contacting Stans No Tubes who agreed – surprisingly – to a 100% warranty and not only sent me a stronger, eyeletted rim to replace it, but also a set of spokes and nipples for the rebuild with my Hope Tech hub. Some of Stans products may not stand the test of touring miles, but their warranty and service is the best I have experienced from any manufacturer, ever.

All of this took time of course and we discovered that while there are a couple of ‘high end’ bike shops near the Centro, their mechanics are anything but. Consider yourself warned if you need serious bike work done there. I won’t go into details but every job we had done on the bikes was poorly done and required intervention from us or another shop to get it properly operational. 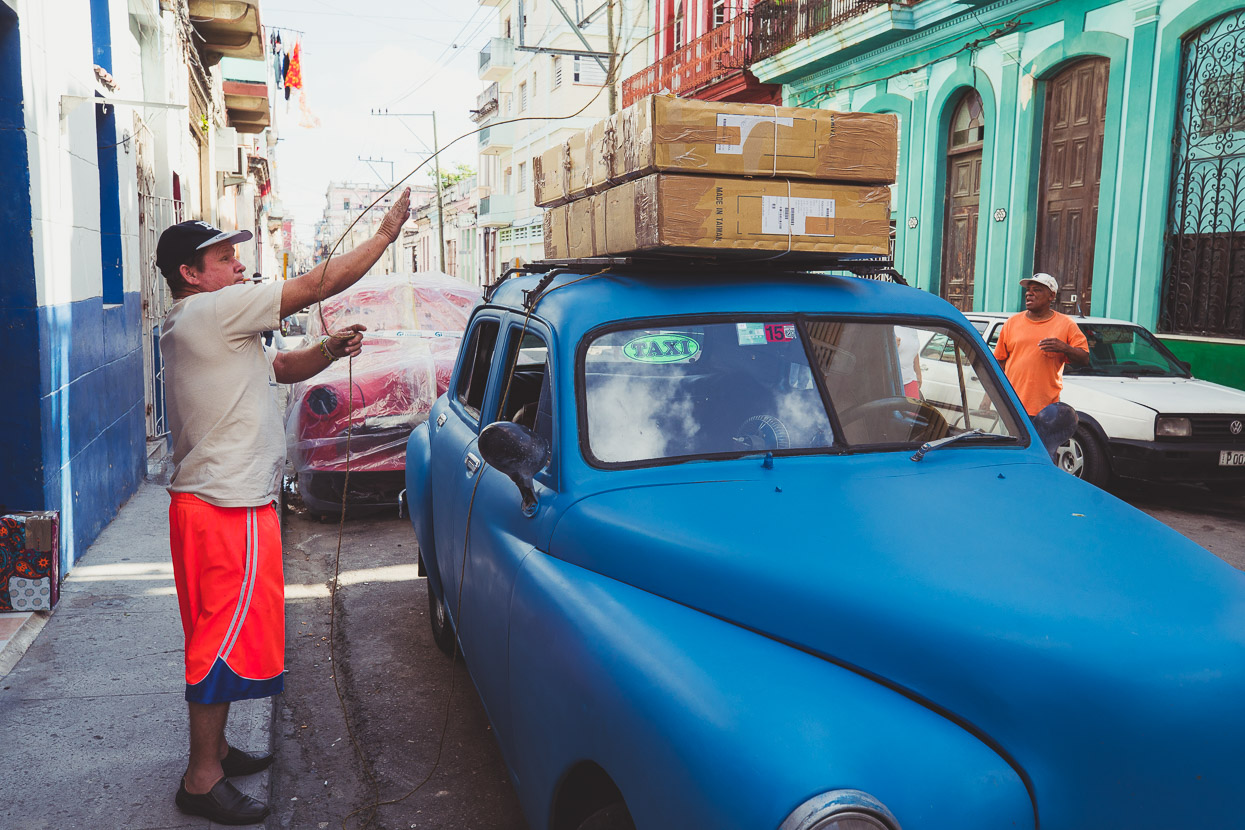 Airport taxi – Havana style. That’s our bikes on the roof. We finished Ruta Mala in Viñales and bussed back to Havana where we had just one night before an afternoon flight the next day. 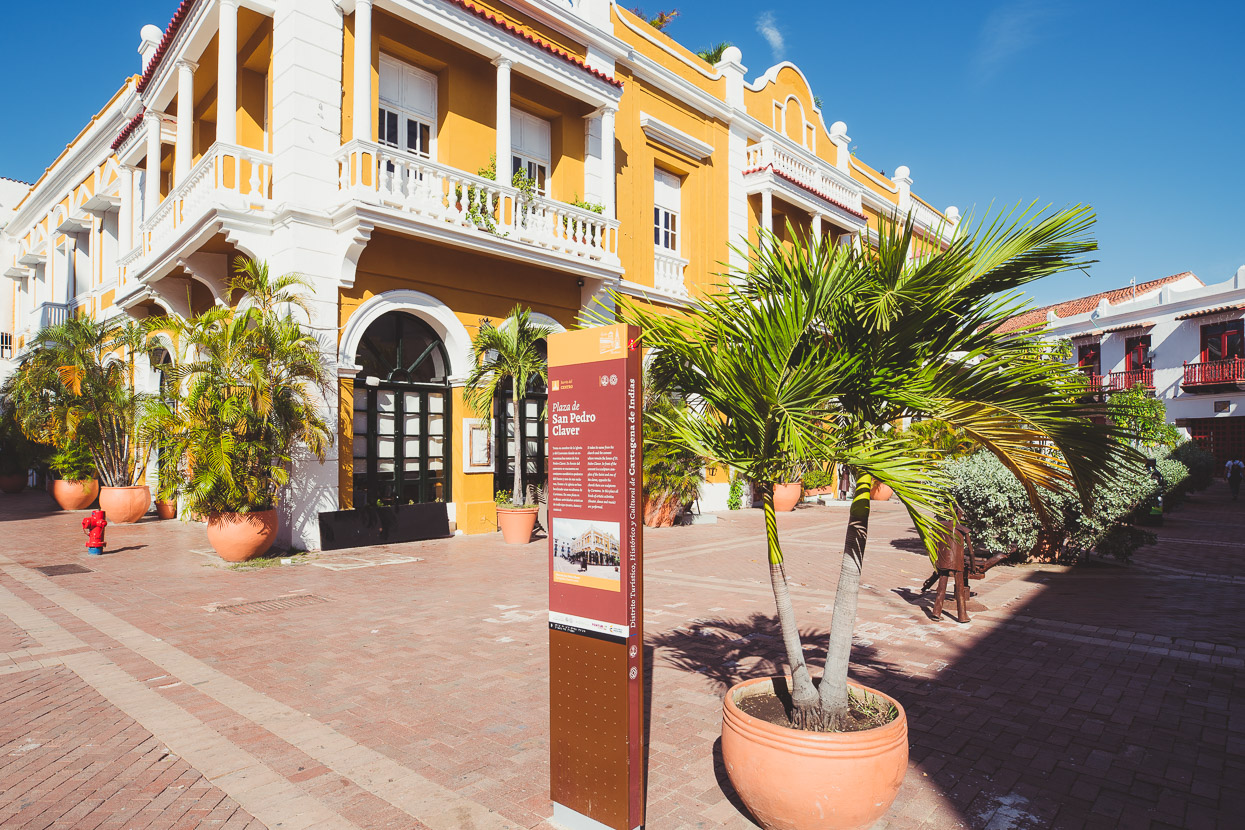 Cartagena is a very large and spread out city, but the classic Centro area with it’s colonial charm is compact and easy to walk around. Vibrant colour and rich building details at every turn. 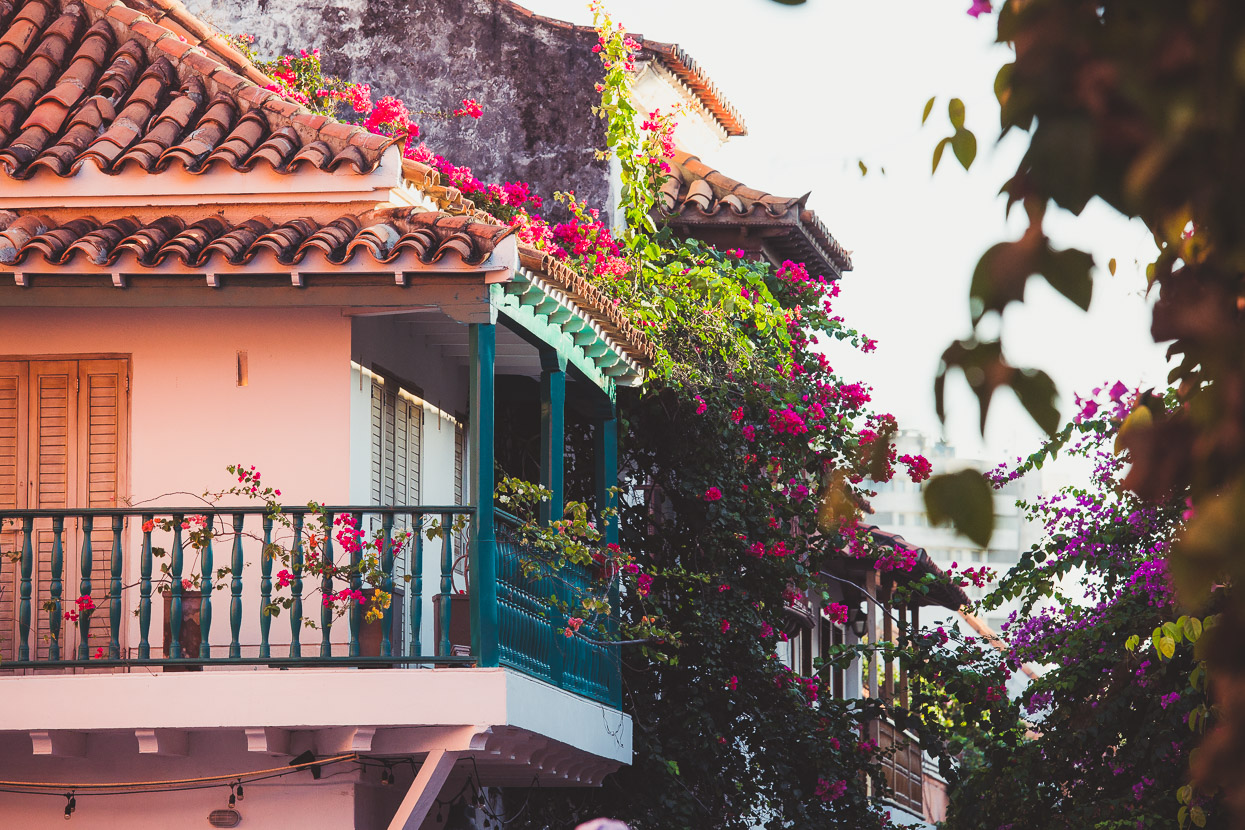 A classic feature of the buildings here are the first floor balconies that overhang the cobbled streets. Interlaced with vibrant bougainvillea of course. 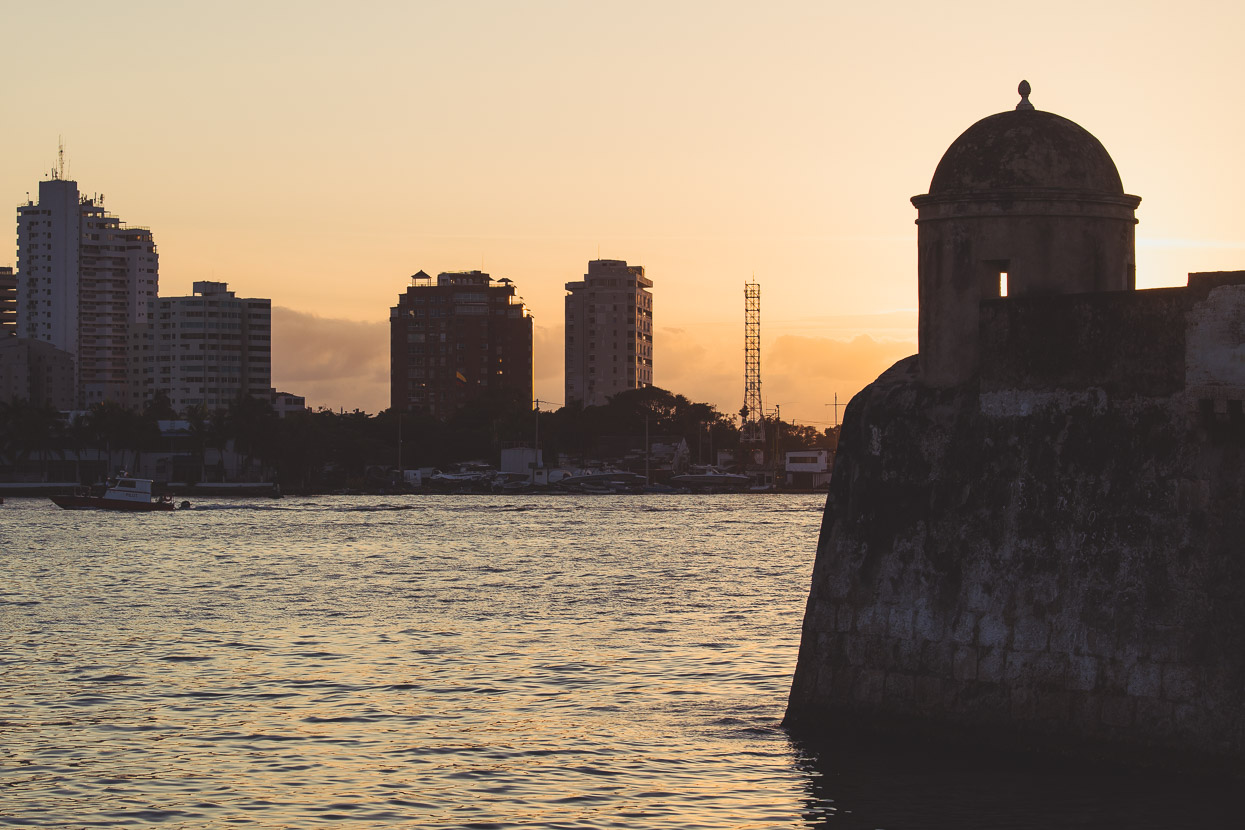 A section of Cartagena’s famous seven mile defensive wall – in some places giving the city a ‘fortress island’ feel. 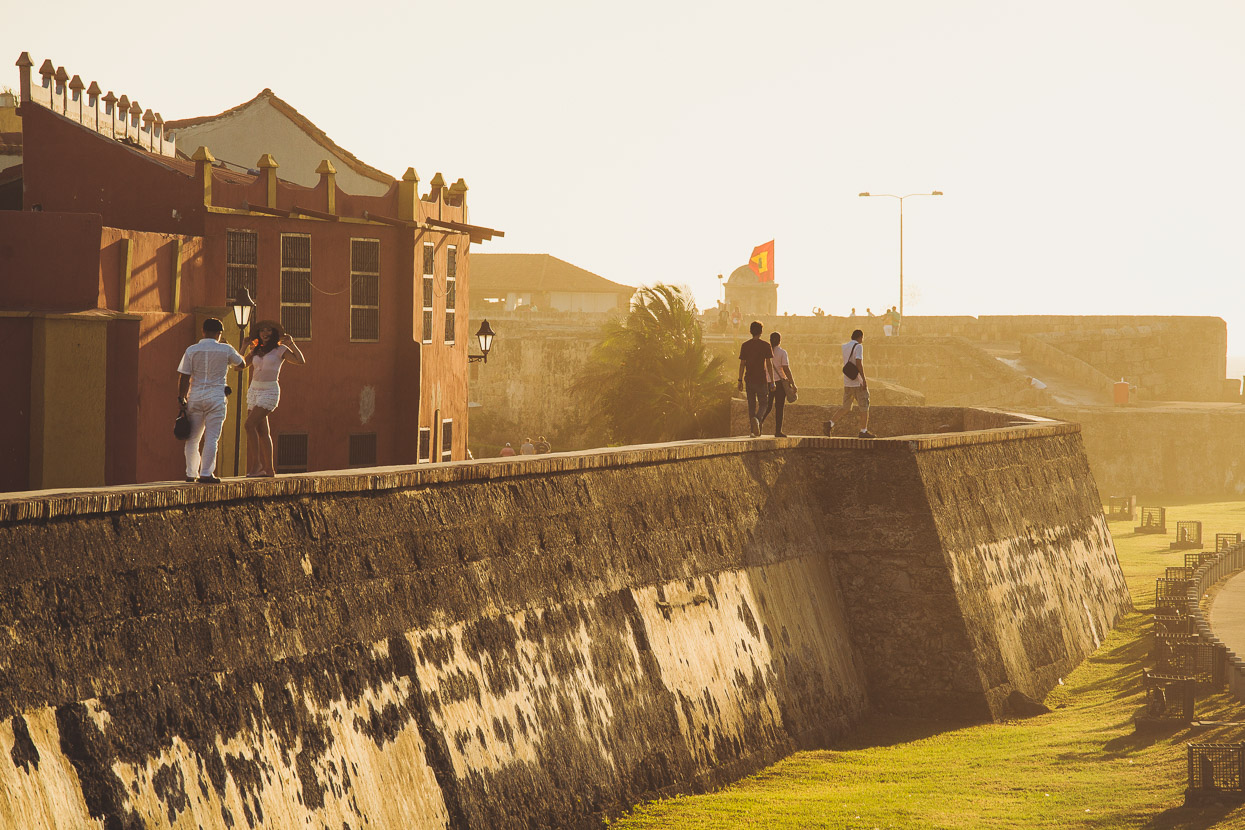 For tourists and locals alike, the place to be at sunset is the top of the wall, which can be strolled along for a couple of kilometres along the coastal side. 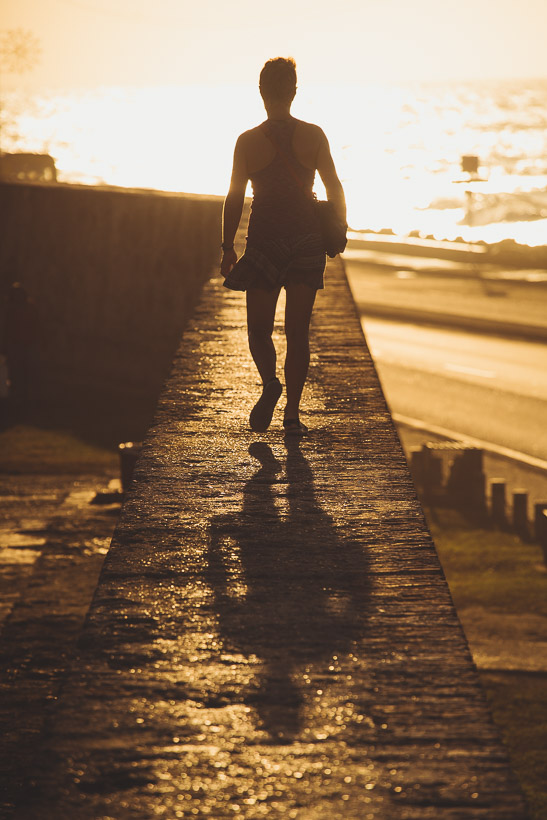 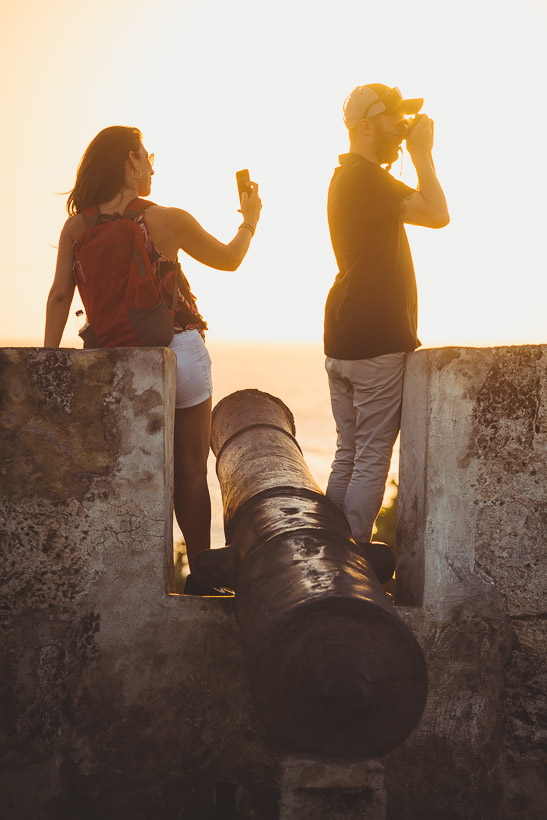 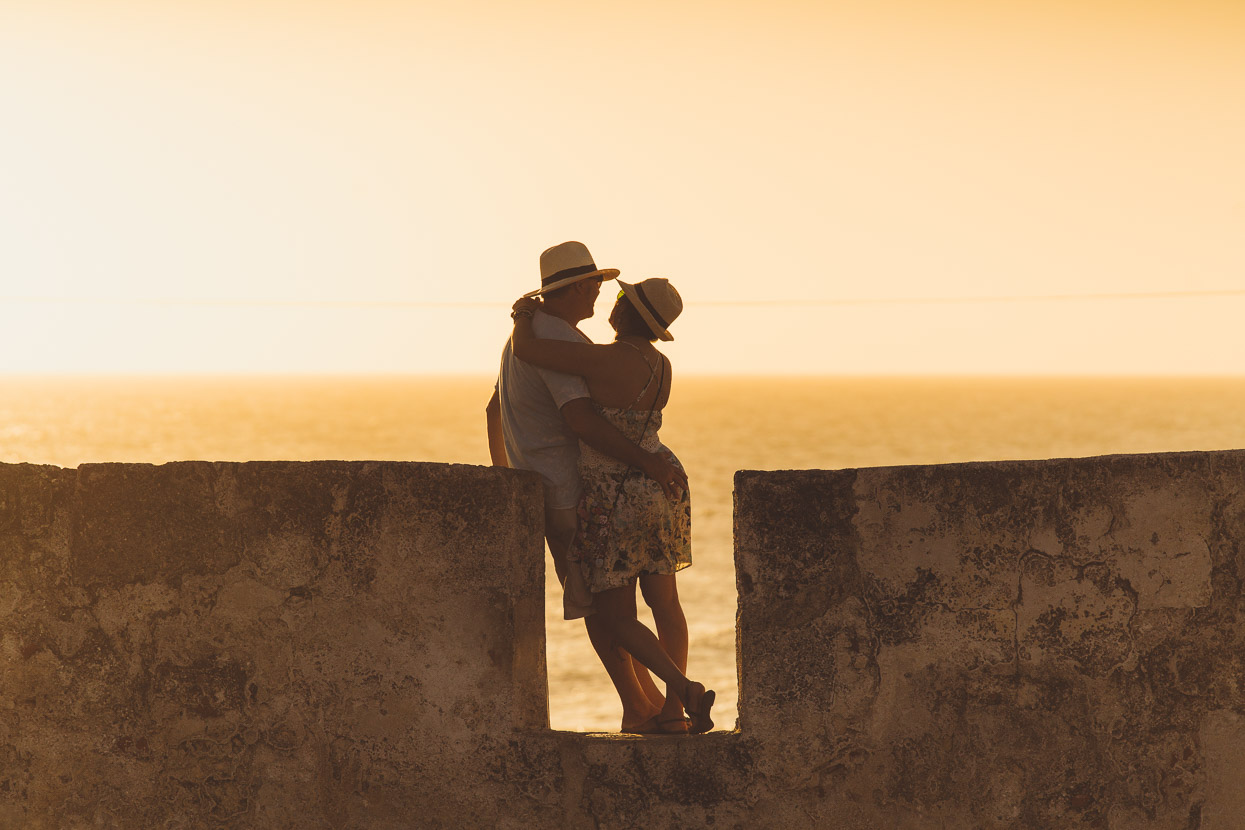 A section of the wall in Getsemani, looking towards the hotel and apartment blocks of Boca Grande. 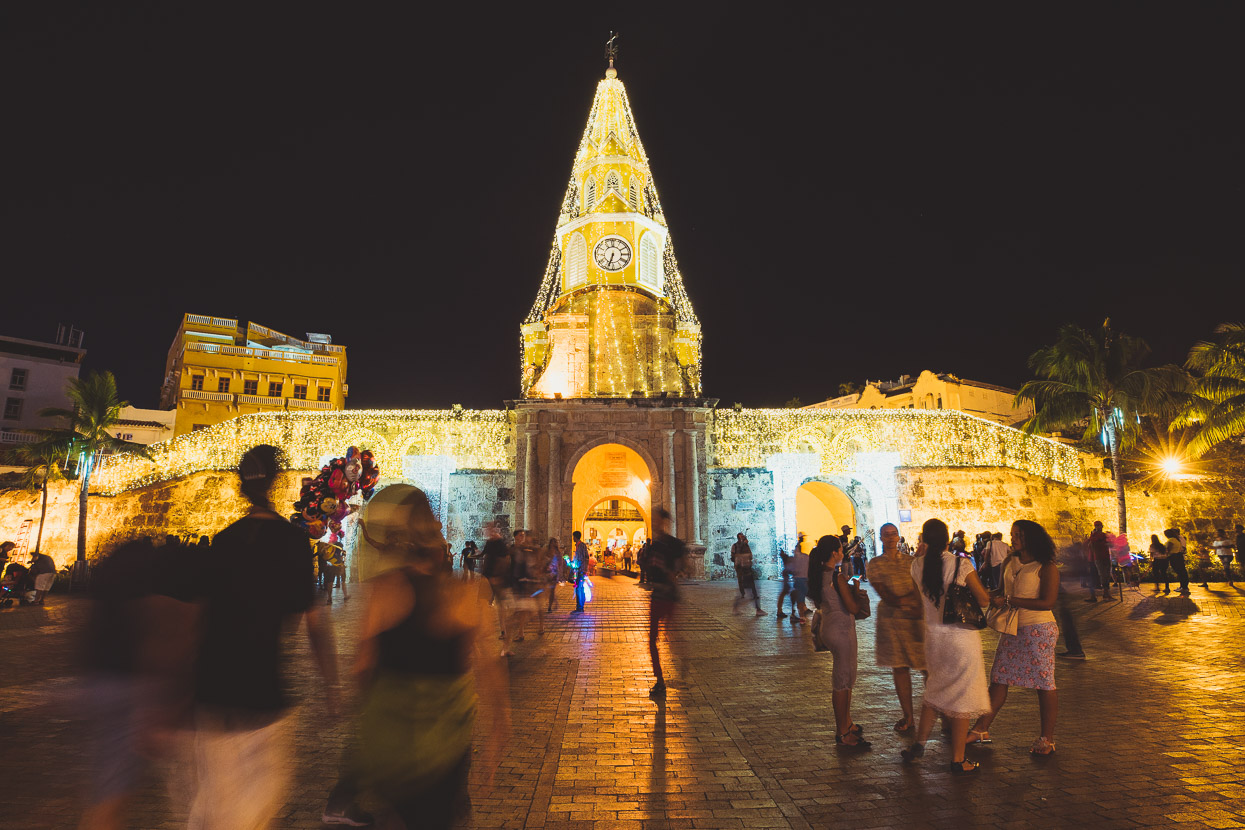 The Christmas/New Year season was in full swing in Cartagena and the whole city was lit up like a Christmas tree; lights everywhere and always crowds in the evening enjoying the cooler air. 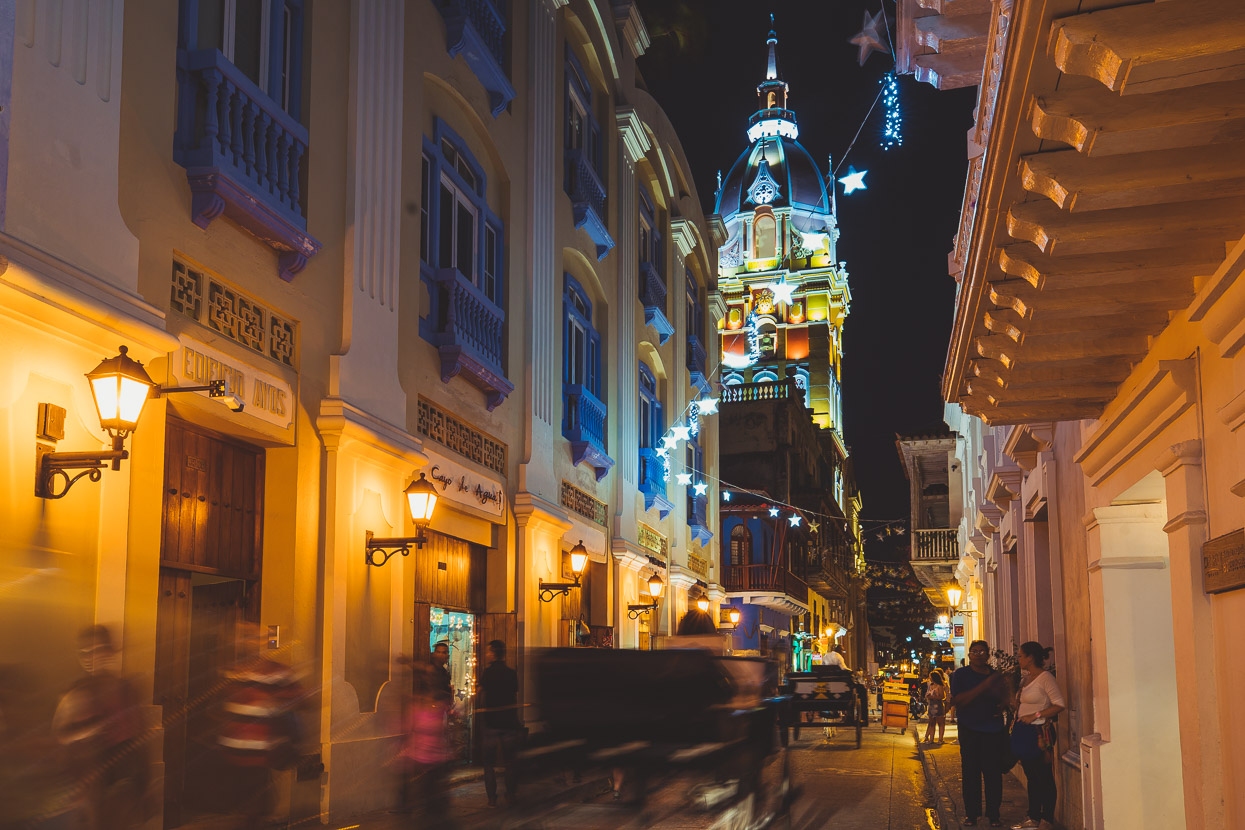 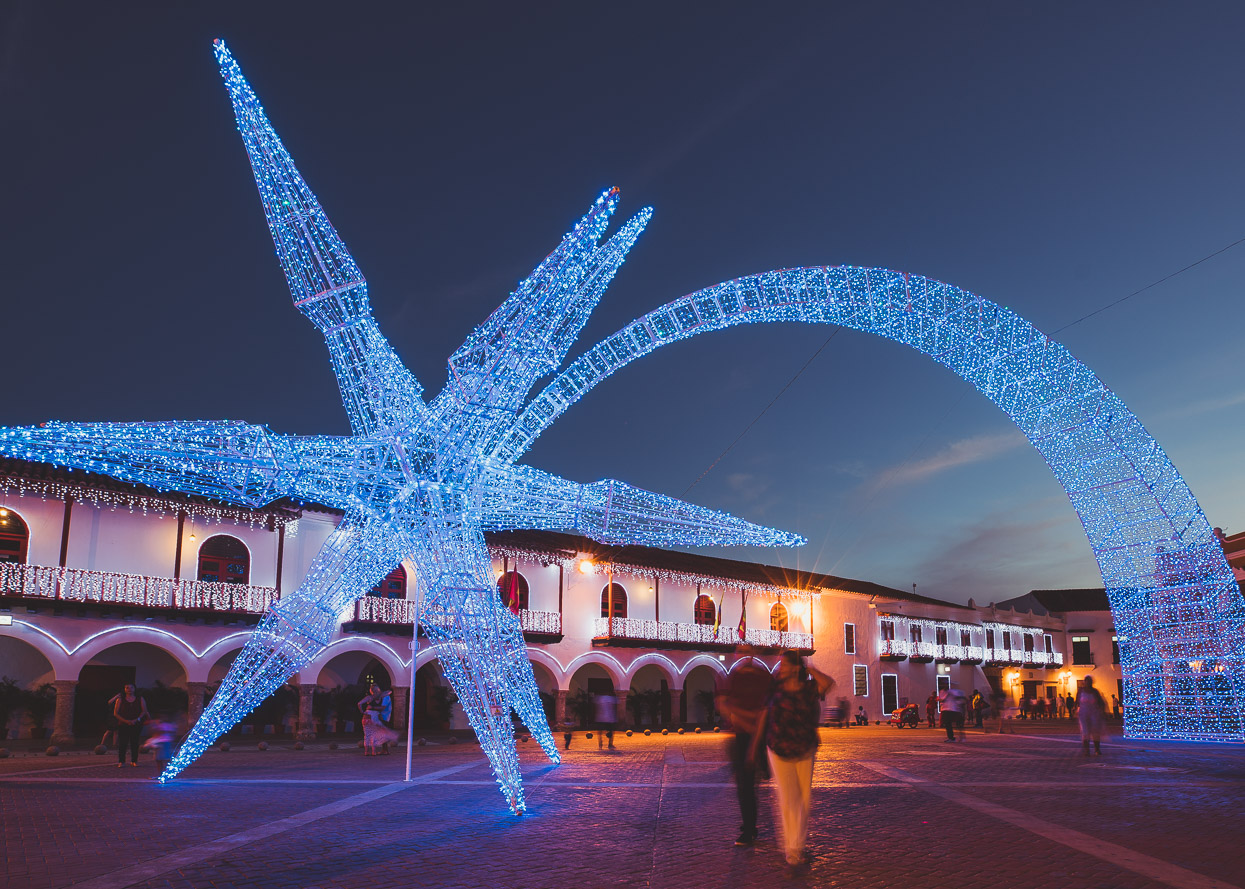 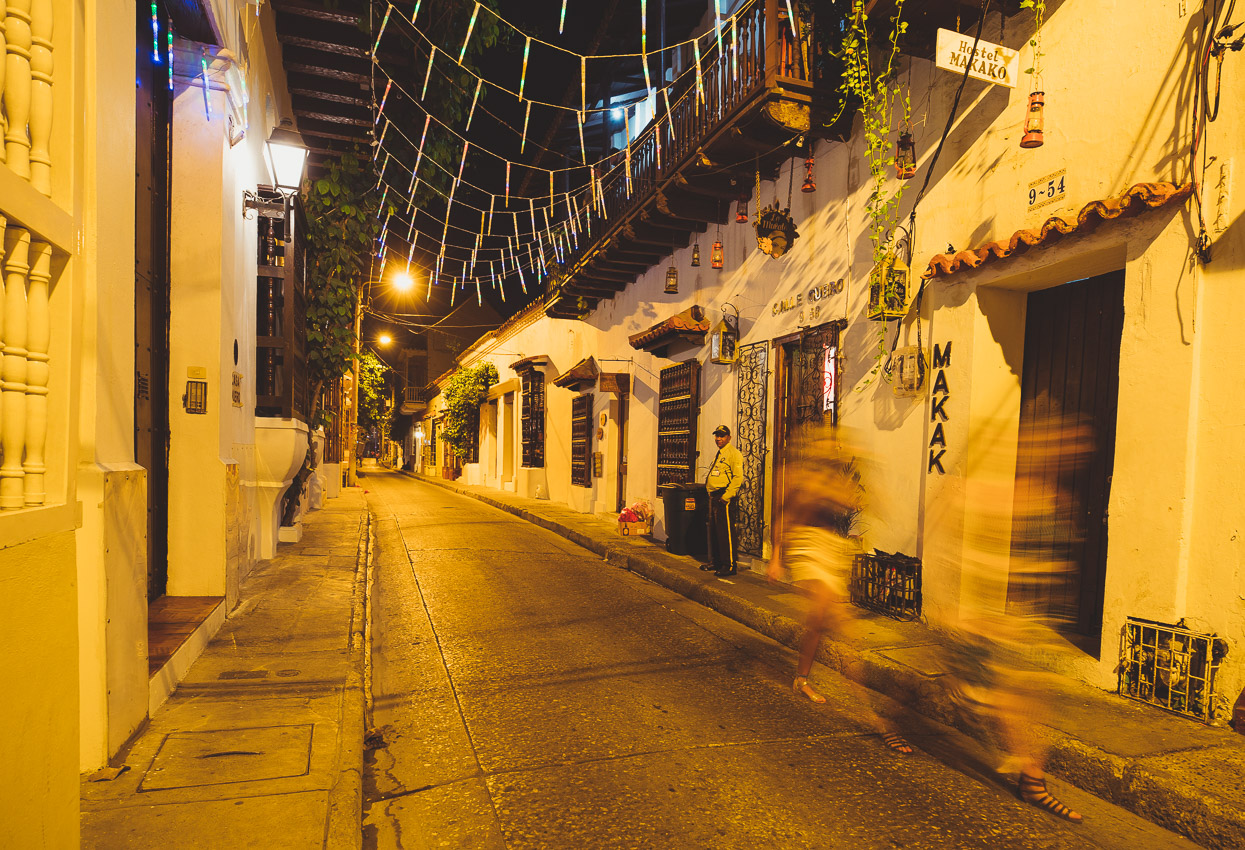 The first five nights we were booked into Hostal Makako right in centro, but once we realised we were going to be there a while longer we had to seek cheaper (but still relatively expensive) accommodation outside the Centro, in the end staying in three different hostals and Air B&Bs. 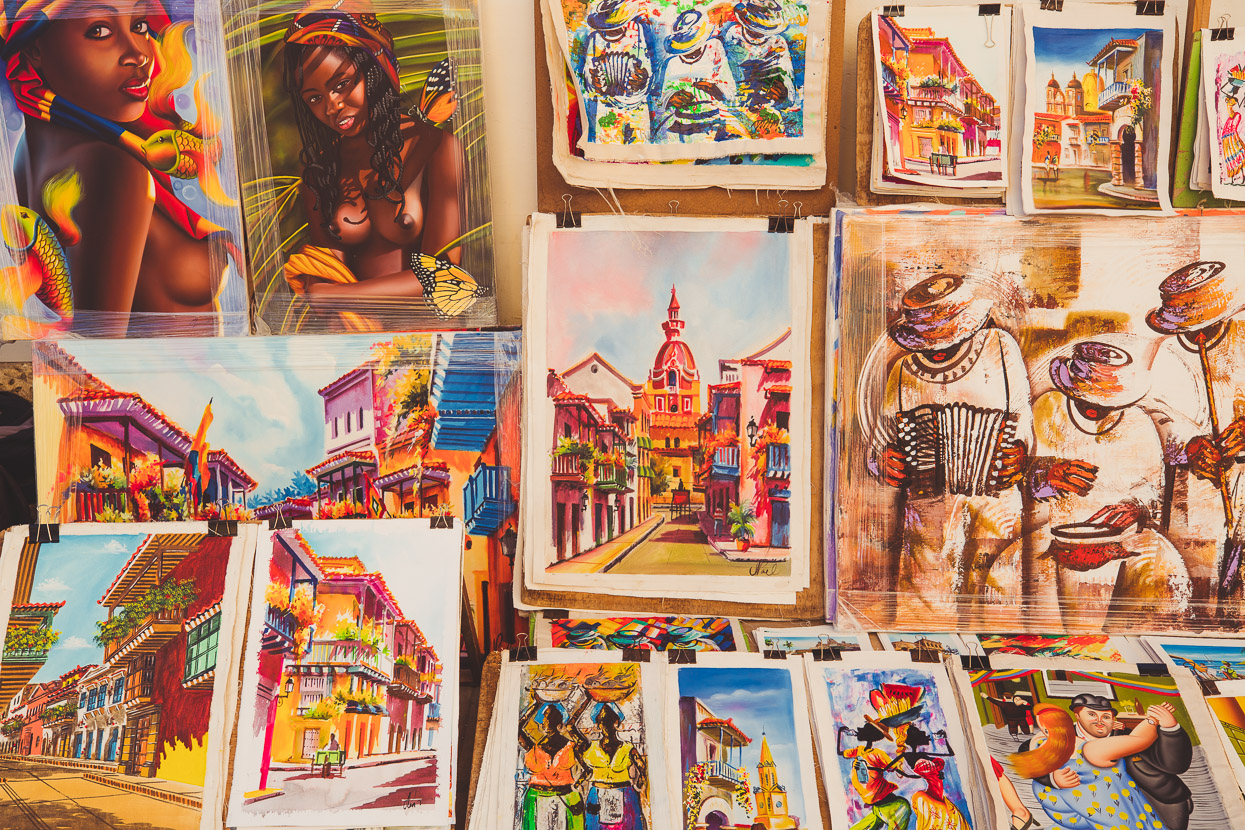 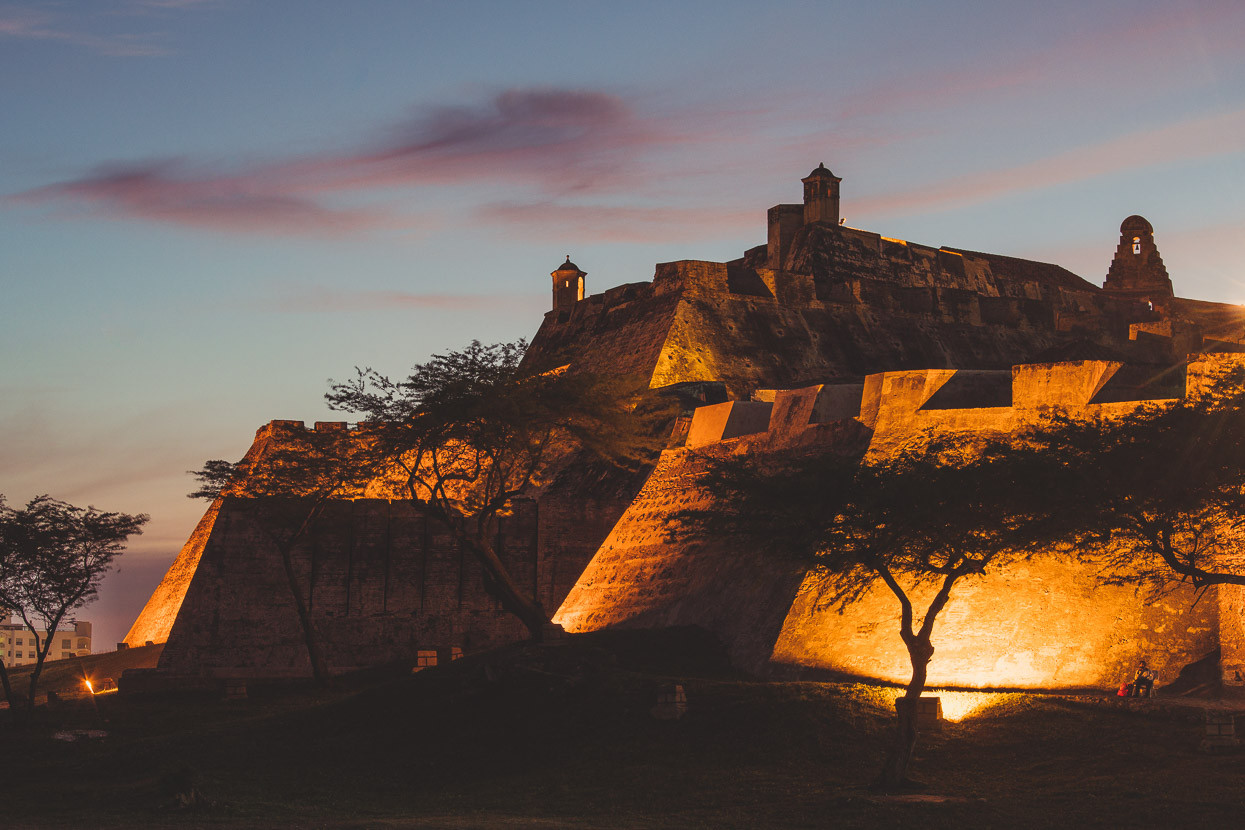 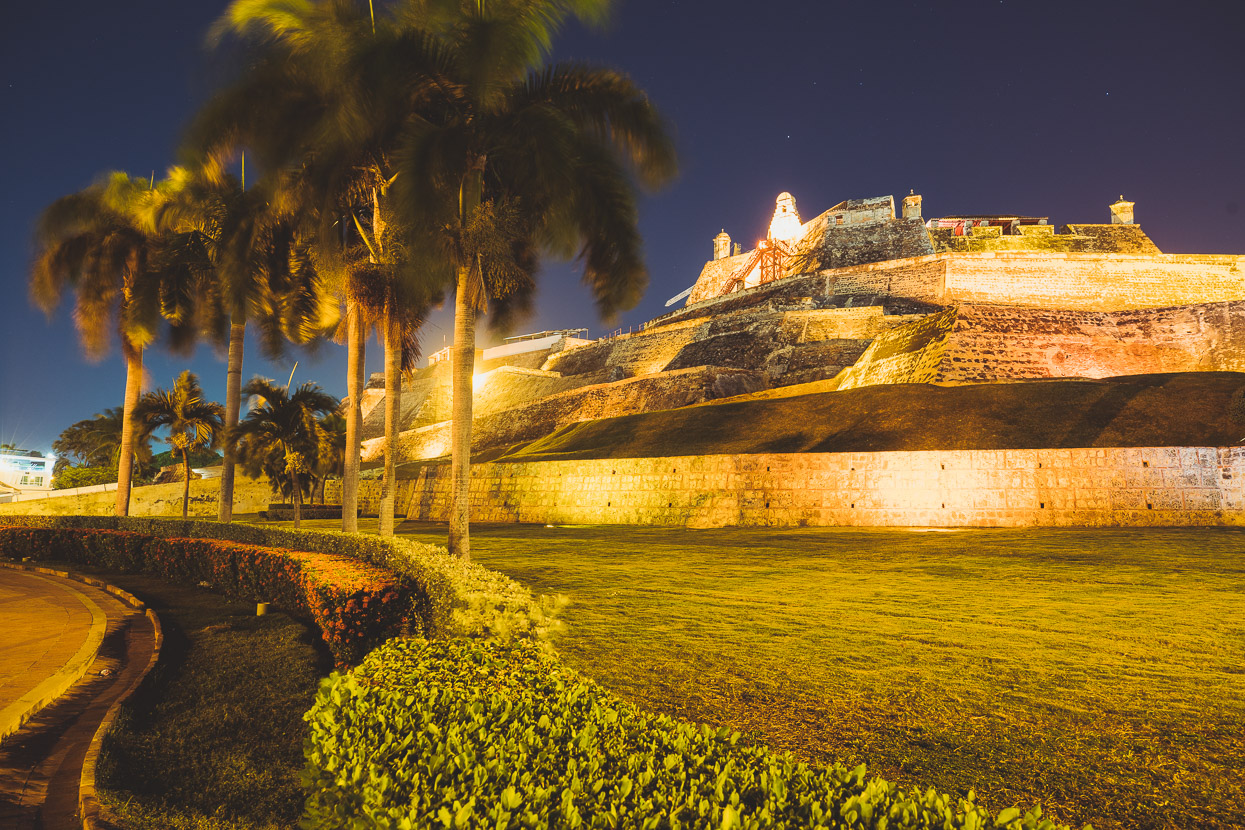 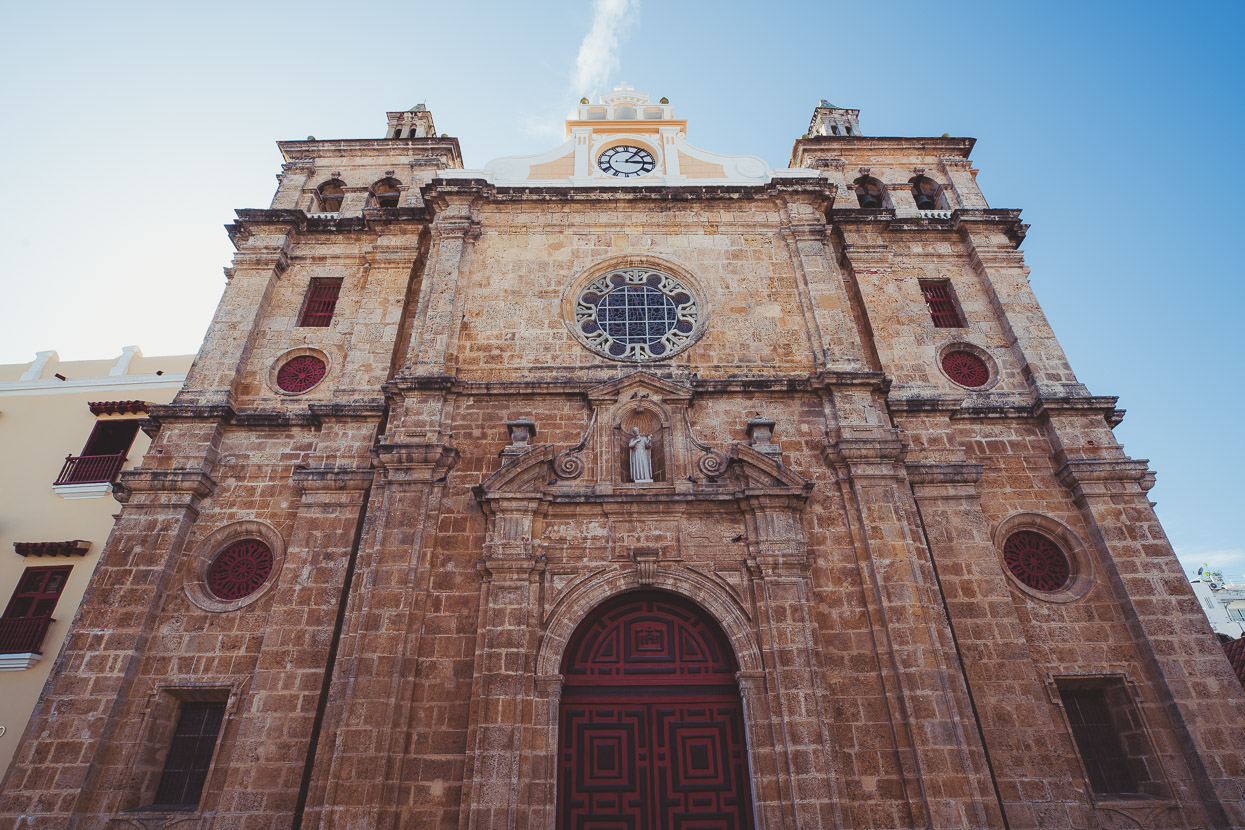 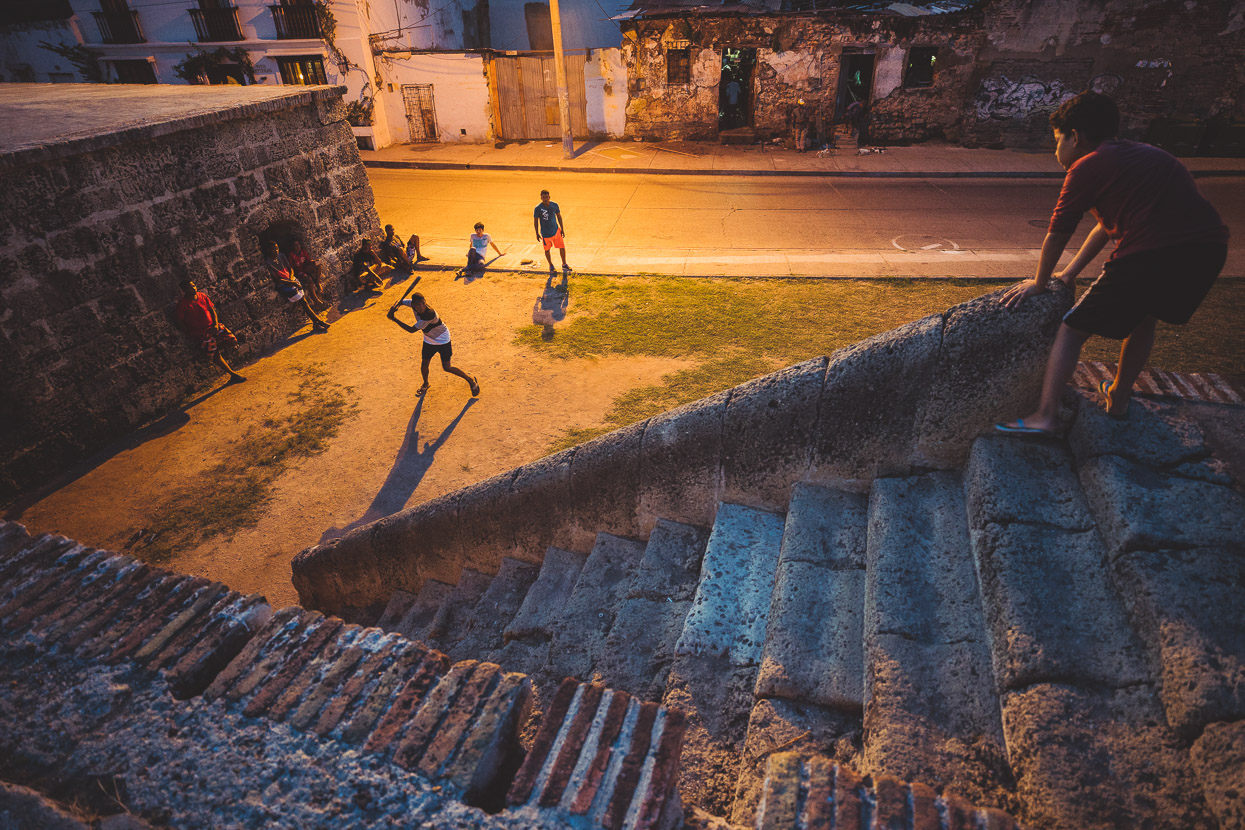 This section of the wall on the edge of La Matuna turned into a baseball court by night. 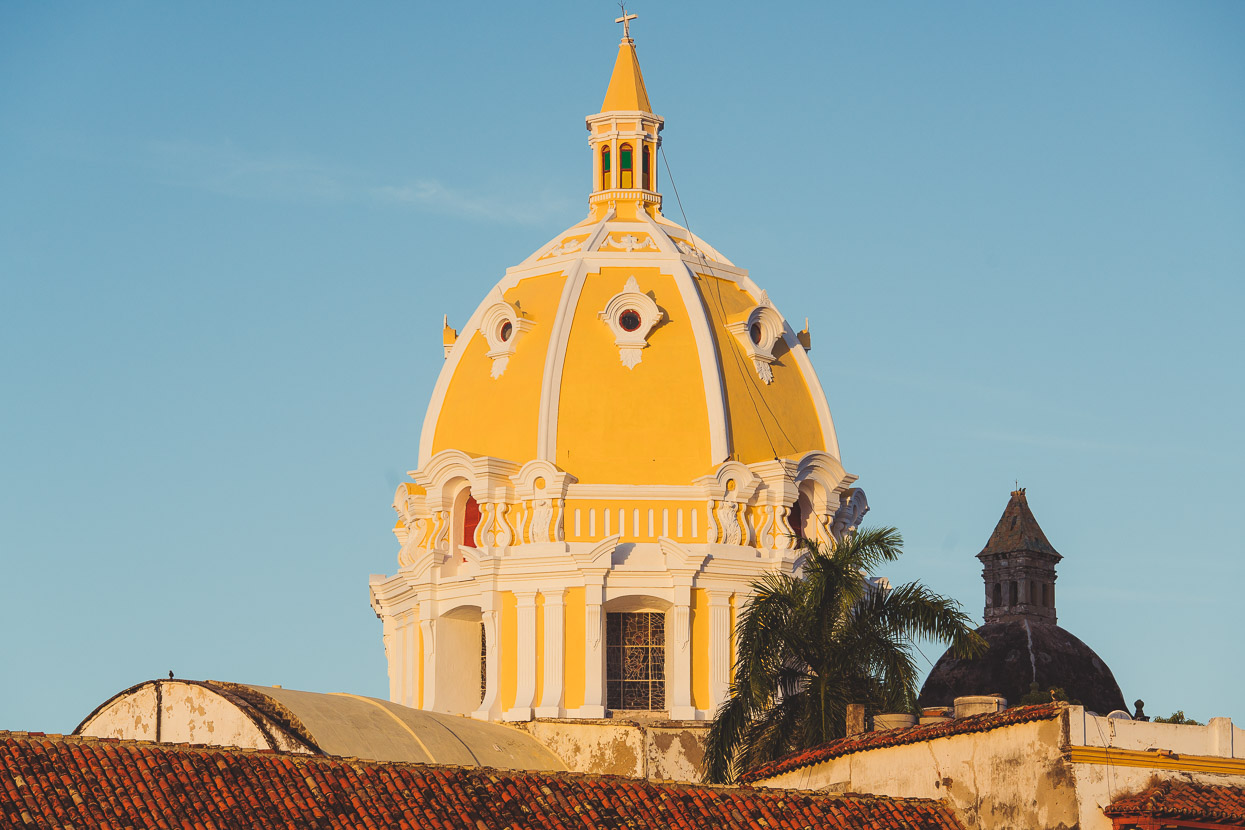 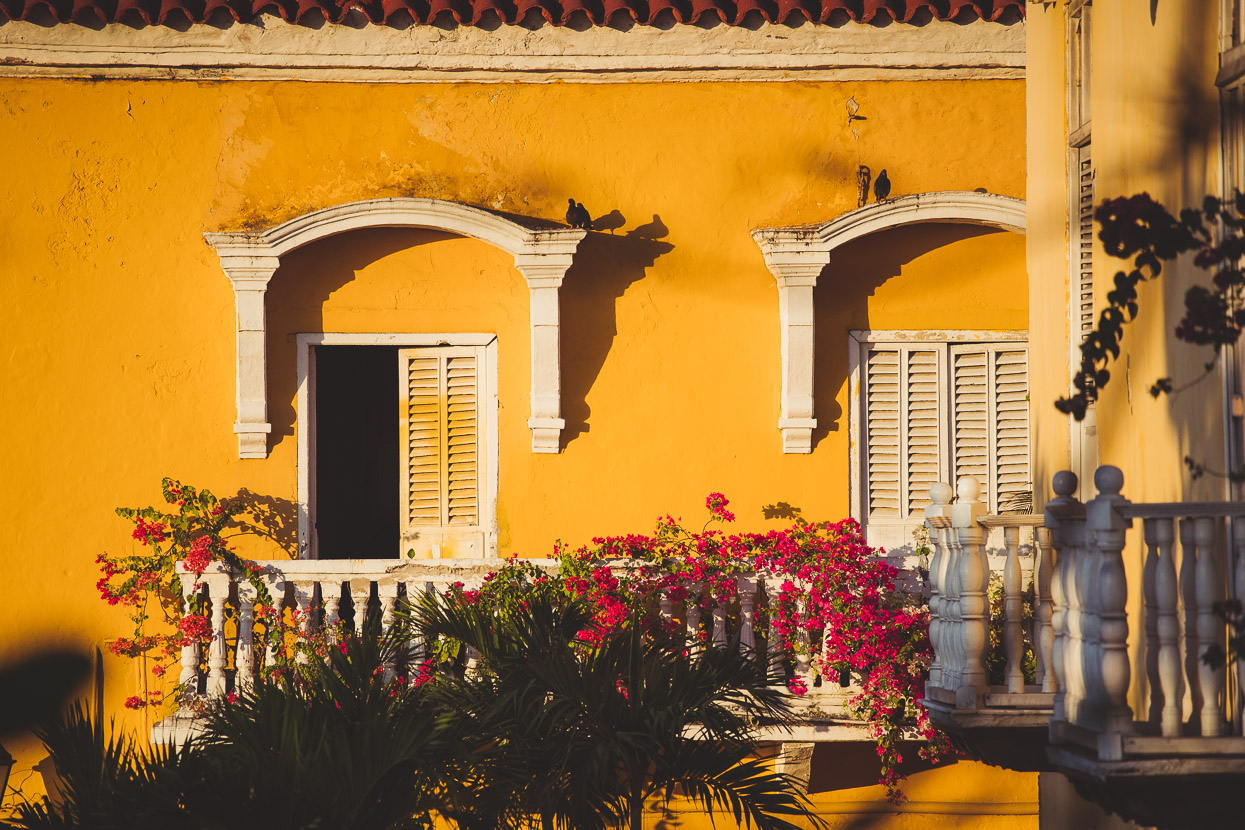 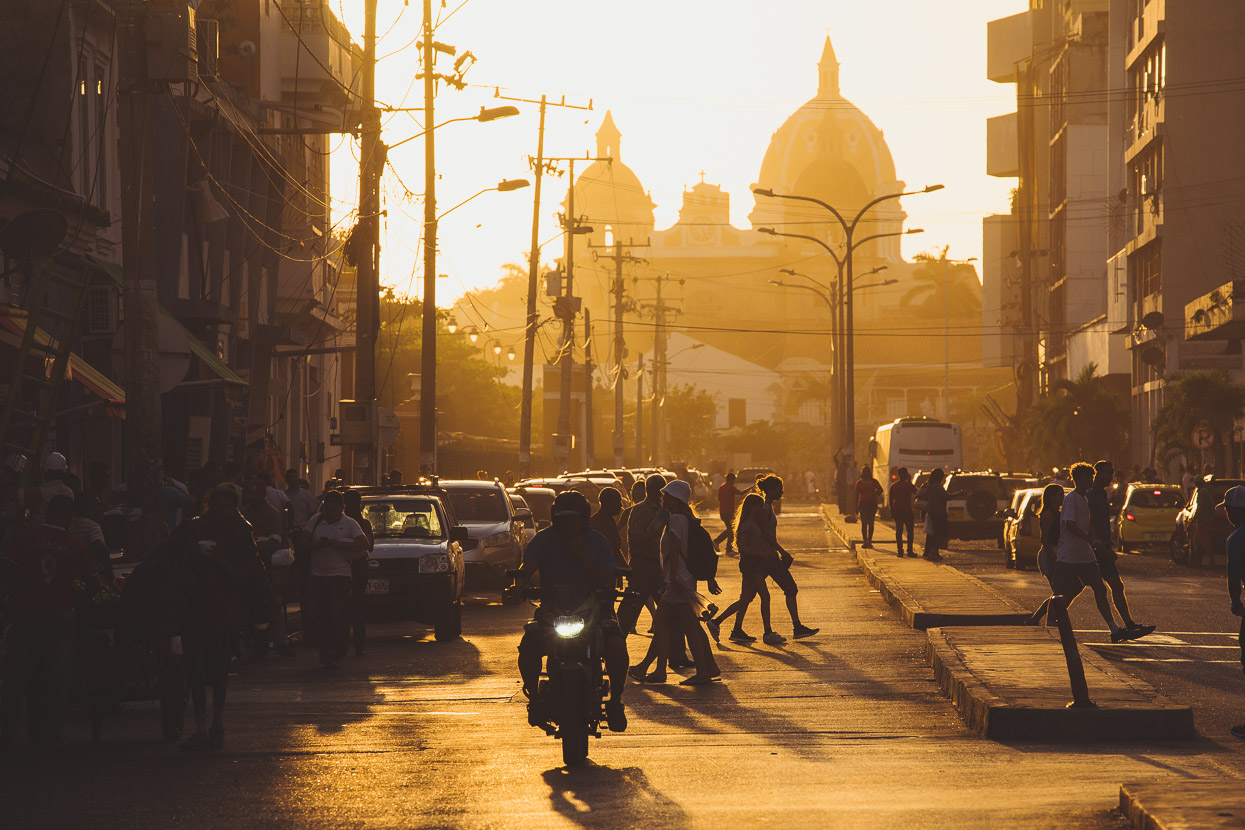 The evocative skyline of Centro from La Matuna. 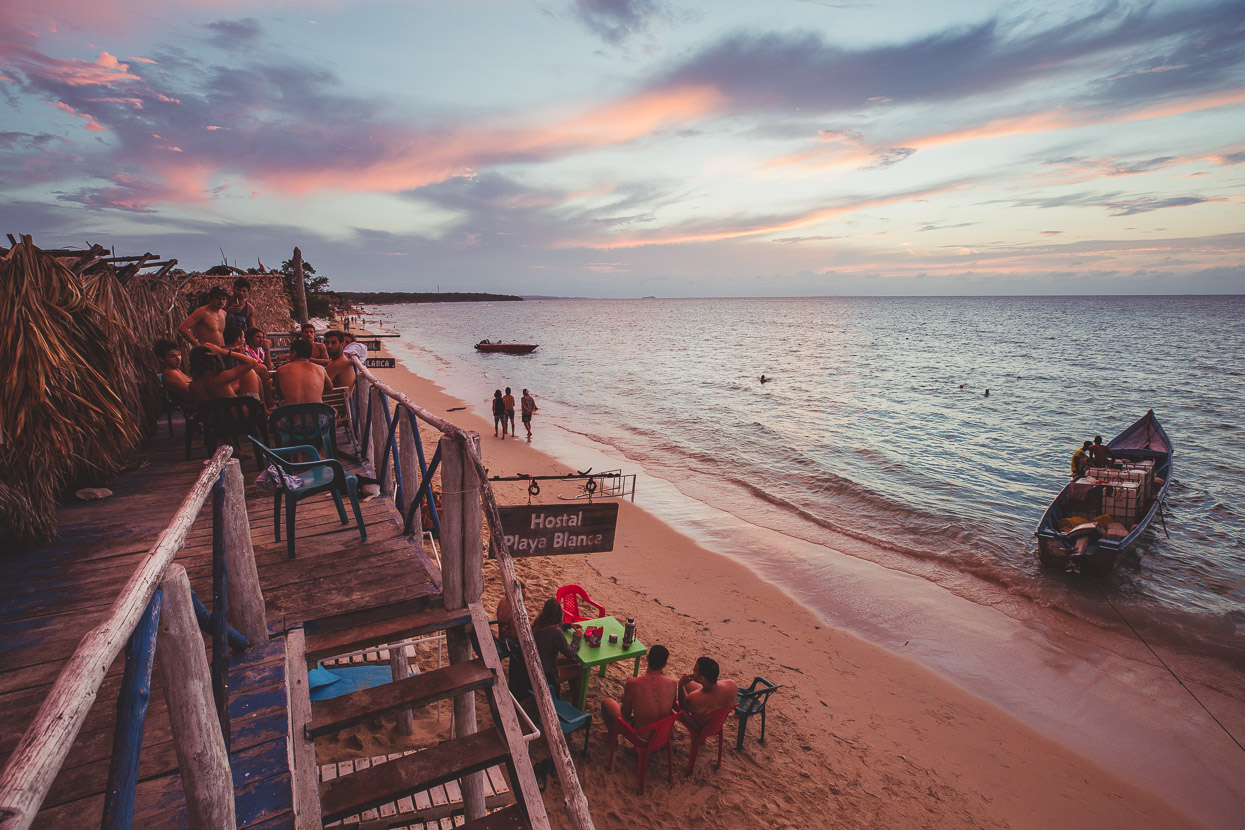 With New Year’s Eve fast approaching we decided we had to get out of the city so headed out to Cartagena’s closest white sand Caribbean beach for three nights. With our panniers stocked with water, rum, mixers and snacks we rode 40 kilometres out there and it was great to be on the bikes again. Sadly we experienced our first robbery of the trip, when two muchachos (young men) on a motorbike snatched Hana’s phone from her handlebar mount; while she was riding.

In retrospect, we kind of saw it coming, as the two men had motored past slowly once already – very close to Hana (I was riding in front), before stopping up the road and pretending to be checking something on the bike. The second time, the phone was snatched from the bar in an instant and they sped off down the road. it was a quiet section of paved highway, close to Pasacaballos.

We carried on to a smaller village about 10km from Playa Blanca and reported the incident to two young policemen there. They said we needed to complete a statement in Cartagena, but offered to give us a motorbike escort the rest of the way to the beach. A nice gesture, even though we didn’t think it necessary. 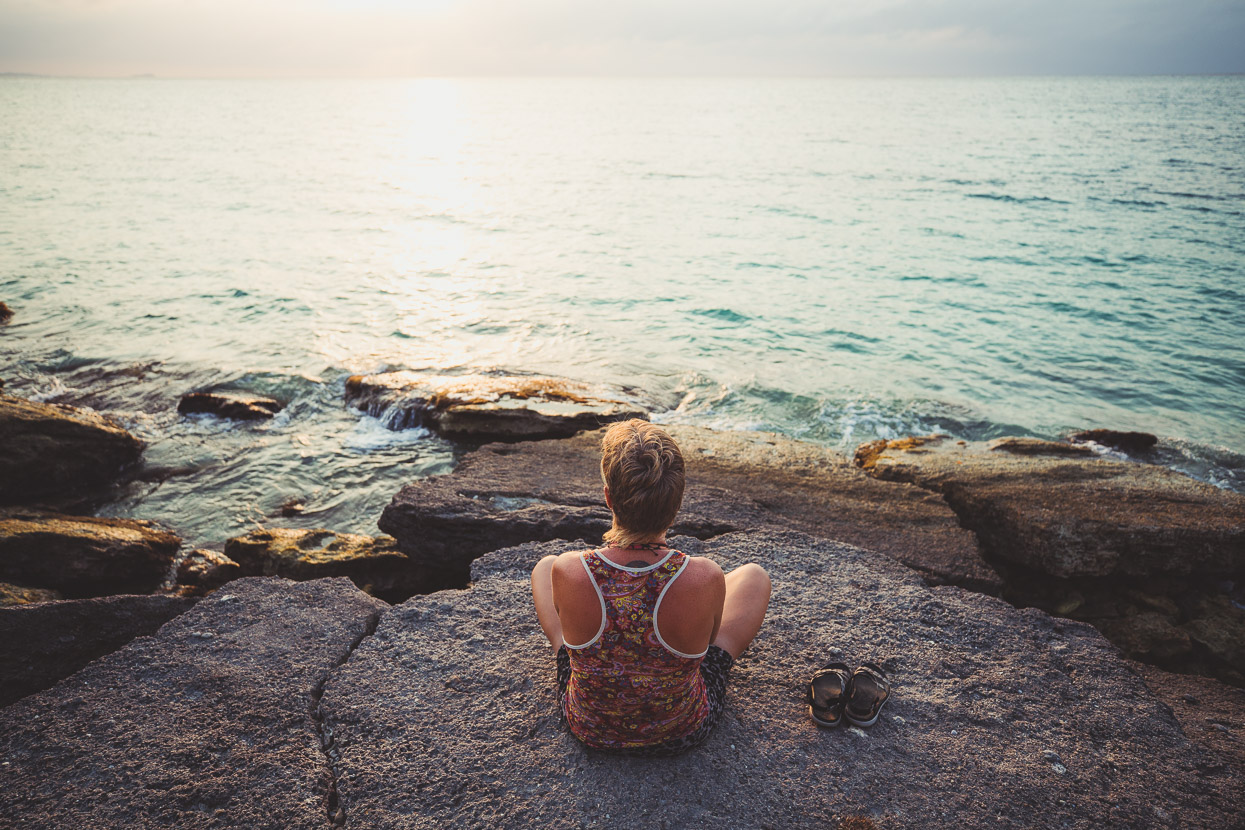 Playa Blanca’s an odd sort of place. Being the closest really nice beach (there are other swimming areas right in the city, but the beaches aren’t special) to the city it gets very busy during the day, between 11am – 4pm. At other times it has a very relaxed, atmosphere with a few restaurants, bars and places to stay. While the food prices were passable, the beach cabaña accommodation there is a rip off. The beach experience is tarnished during the day by jetskis ripping up and down the bay (there are no distance restrictions) and passenger boats coming and going. But for the peace of our morning swims, quality reading time under the shade of a tree and affordable al fresco dining on the beach it was well worth a visit. 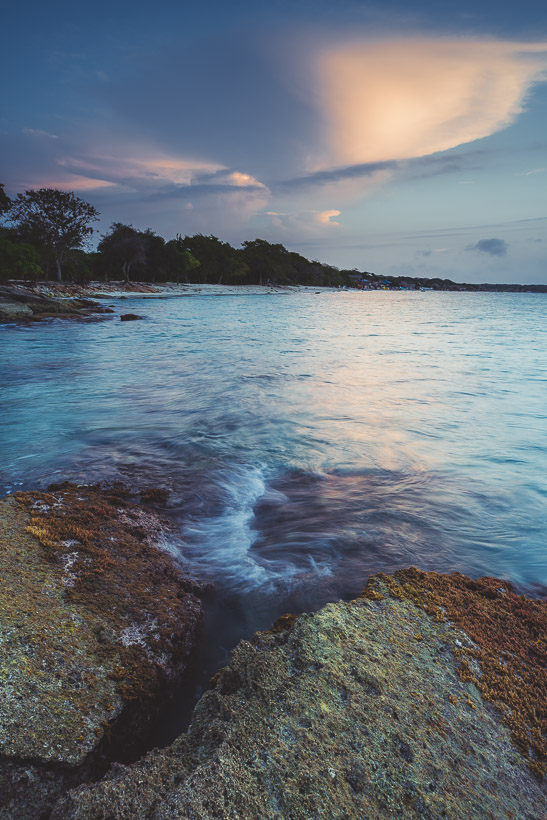 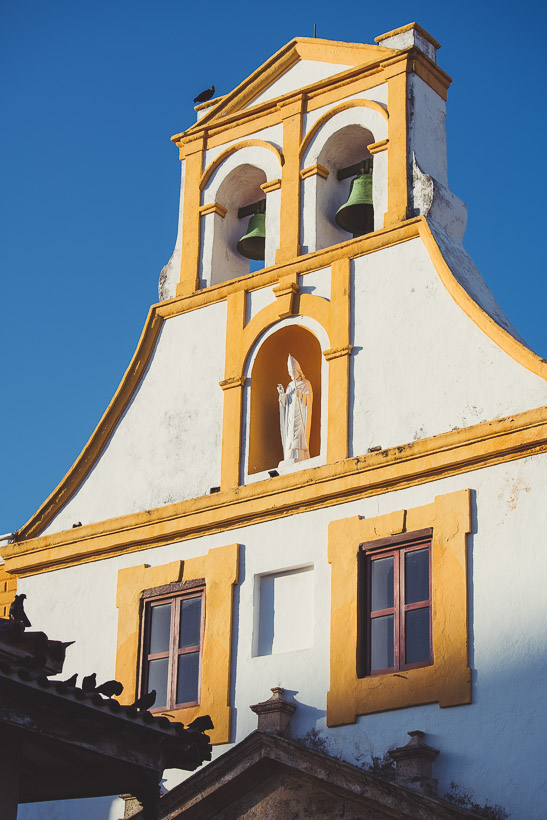 Back in Guatemala the nice people at Hope Technology had generously agreed to supply us some of their very reliable Pro 4 hubs and headsets to get our bikes back in good order for the long run down through the Andes. But it took until we met Hana’s parents in Havana for us to actually obtain the parts, and then we finally got them on the bikes in Cartagena.

In other bike updates, we’ve also replaced our Shimano 11-36 10-speed cassettes with SunRace 11-40 10-speeds. Matched with our small 22 tooth sprocket up front these give us an even easier climbing gear for the mountains and will save our knees.

Stans No Tubes have also sent me their durable Flow SI rim which has eyeleted spoke holes, so hopefully that will put an end to cracked rims for me. 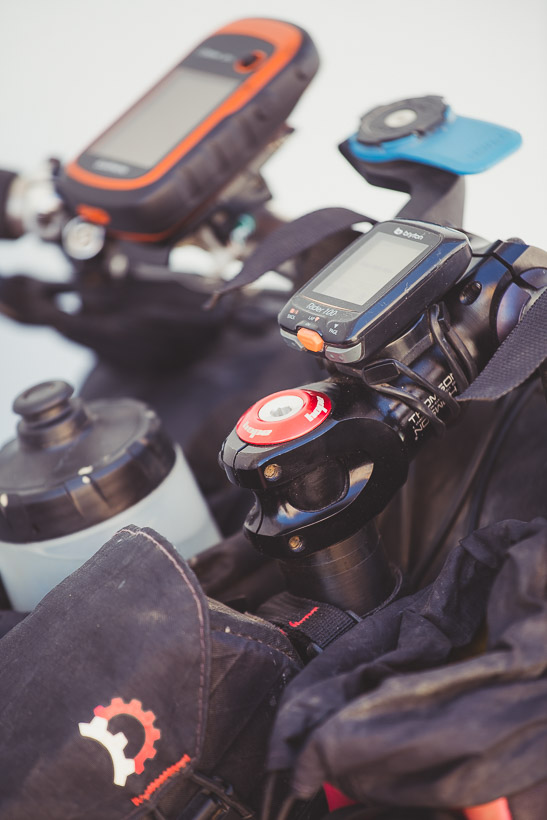 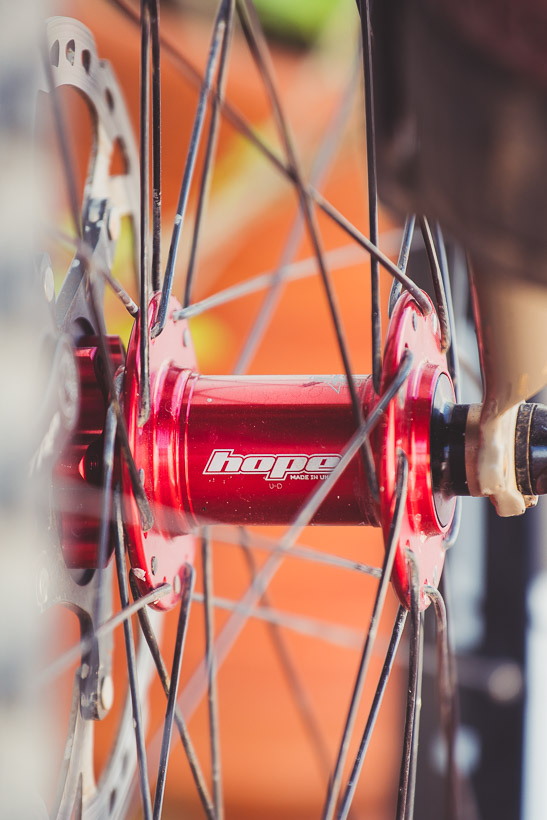 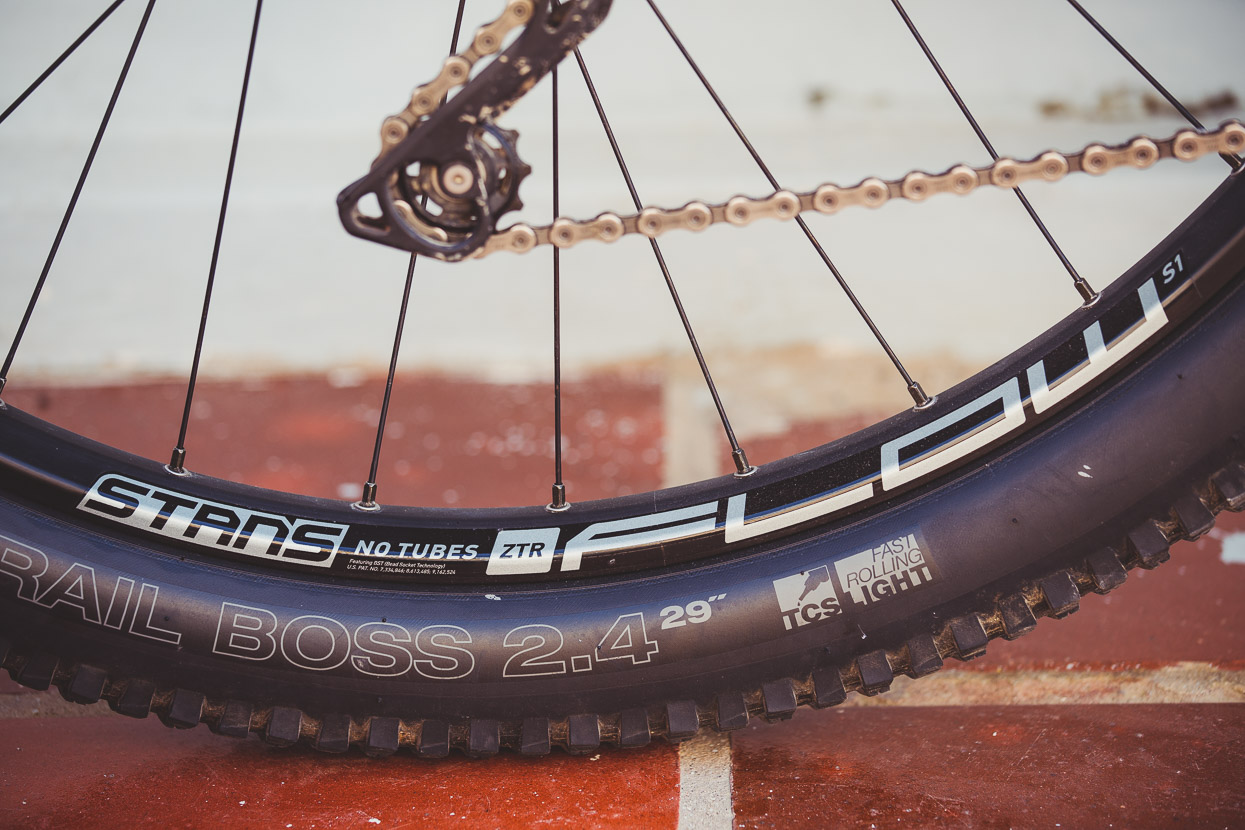 Notes: Welcome Bikes and Bikes JC seemed to be the best stocked and supplied if you are looking for parts. The service at JC Bikes was the best, but the mechanics at both places lack experience/attention to detail.

Do you enjoy our blog content? Find it useful? We love it when people shout us a beer or contribute to our ongoing expenses!
Creating content for this site – as much as we love it – is time consuming and adds to travel costs. Every little bit helps, and your contributions motivate us to work on more bicycle travel-related content. Up coming: camera kit and photography work flow.

Thanks to Biomaxa, Revelate Designs, Kathmandu, Hope Technology and Pureflow for supporting Alaska to Argentina.

on the shoulders of giants We're a long way south since our last report was filed from the dusty Bolivian desert town of Uyuni on the edge of the salars.…
Read More
November 30, 2019 in Alaska to Argentina, Bike Packing, Bolivia

salars de coipasa and uyuni Since we began seeking inspiration for our Americas tour a few years back, several prominent highlights stood out – some must-see locations that are unique to…
Read More
November 14, 2019 in Alaska to Argentina, Bike Packing, Bolivia, Chile

south towards the salars The Ruta de las Vicuñas had been on our radar ever since we'd seen Cass Gilbert's beautiful photos in the route writeup found on Bikepacking.com. For…
Read More
Love0 Share Tweet