Into the Steeps: Meulaboh – Takengon 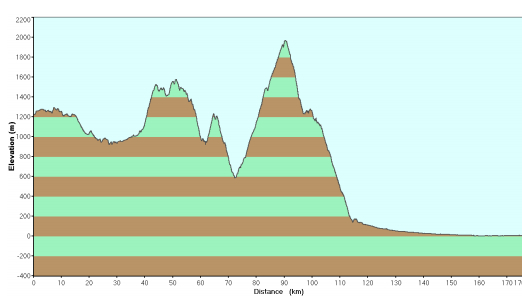 From Meulaboh the mountains beckoned. After our quick ride down the coast from Banda Aceh we were looking forward to getting into the hills and off the flat roads. Cycle touring changes in the hills. While on the flat the sensation is more of being a pedaller and a passenger. It’s more passive. It’s in the hills that I really feel like I’m riding my bike; loving the sensation of switching through flowy turns, keeping momentum over rollers and finding my rhythm on a long climb.

We had a cruisy 44km day ahead of us first, transitioning to Jeuram near the base of the hills, just as well seeing as I’d been sick in bed for two days in Meulaboh. From there we were going to head to Takengon, straight over the Pusat Gayo Range with our highest passes around the 1900m mark. Not so high really, but a little daunting when approached from sea level with loaded cycle touring bikes. Note that we rode the pictured profile from right to left! 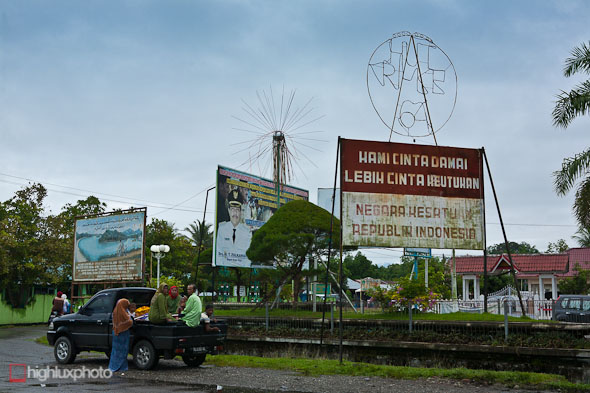 Our first stop out of Meulaboh was Jeuram after a cruisy afternoon ride of 44km. Lisa at Aceh Adventure had recommended using this town as an overnight stop before taking on the 1900m climb the next day (to make sure we got over it before dark). It was good advice.

We found a basic hotel and after seeking out a meal in a shack down the road had turned in for the night when there was a knock on our door. Word had spread fast that there were a couple of tourists in town (tourists rarely go this way) and the police had gotten word that we were headed over the ranges for Takengon. I accompanied the policeman down to the lobby. He pored over my passport for a while and then quizzed me about our plans, concerned that we didn’t know what we were getting ourselves in for. I impressed that we’d ridden there from China (over 7 months) and were experienced and well equipped and had food and water for the ride and that seemed to leave him satisfied, and just a little amazed.

Less than a decade ago though this once fiercely independent region was at civil war with the Indonesian Government, with untold deaths and human rights abuses taking place, and the region was practically closed to tourism. It took the tsumani to really broker peace. The policeman’s interest in our plans (and concern for us) probably echos sentiments of suspicion and fear that have yet to subside. 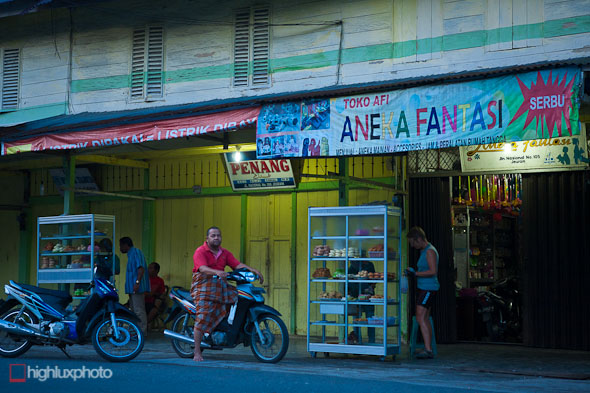 At dawn the next day we were on the move and were pretty stoked to find fresh donuts as we pedaled out of town. 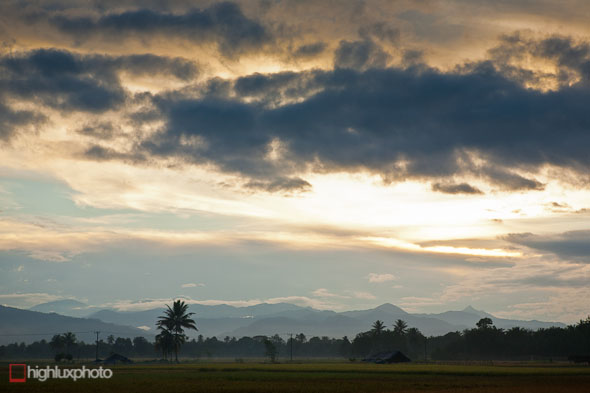 The sun crept into the sky, revealing details in the landscape and the still mist clad ranges that we were headed for. 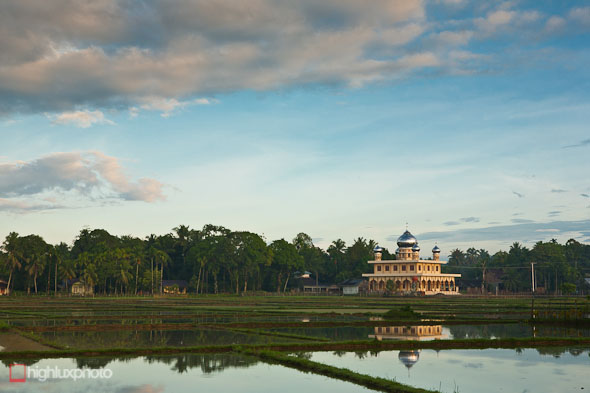 Ornate mosques dot the landscape, looking like they have landed there from another planet. 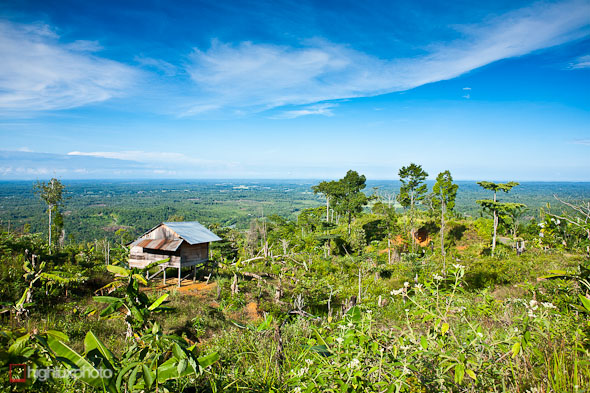 After 23km of flat riding we crossed a river and entered the 30km climb to 1900m. It wasn’t long before the clouds burned off and views opened up of the coastal plain below as we quickly gained height. 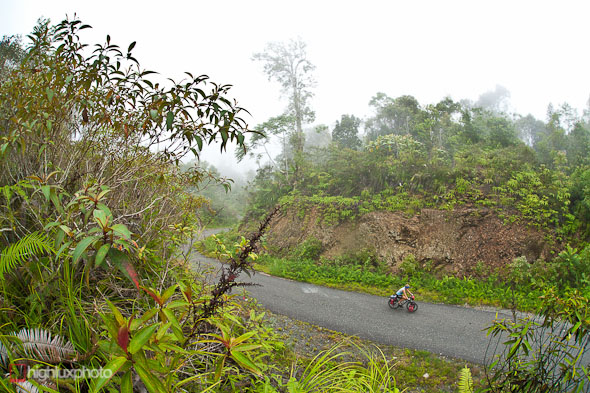 It was a pleasure to be climbing a road through a national park for a change, it meant there were no dwellings (no legal ones anyway…) no shops and few people. The road was narrow, well sealed, and except for being incredibly steep sometimes after the 43km mark, a really beautiful climb. 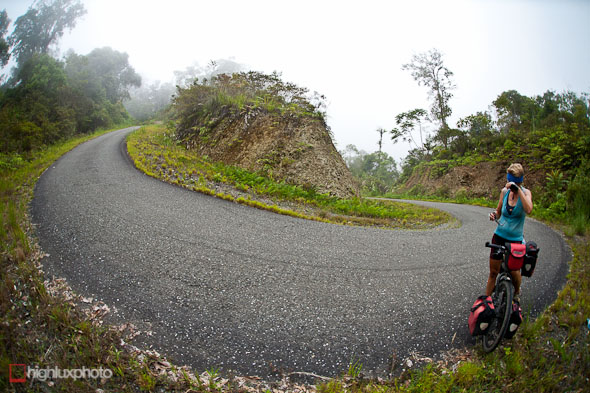 Even in the mist and 1000m up we were pouring sweat. 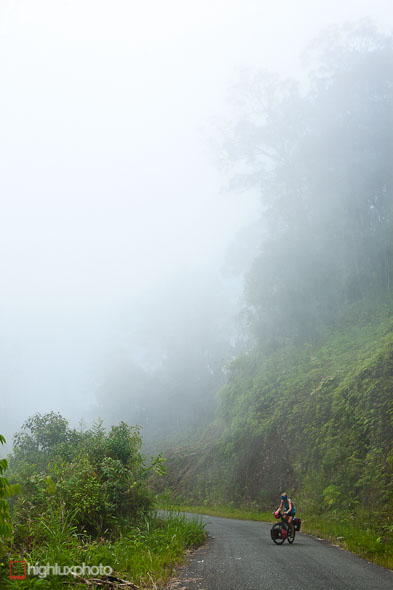 We ground on, measuring our progress via the altimeter and laughing when passing motorcyclists had to drop their pillion passengers to make it up the steepest pitches. Our speed seldom got above the 4km/h mark – although in reality it was probably half that as the steepest pitches had us stopping every 50m to let our legs breathe for a moment. We’d read several accounts of people having to dismount and walk sections of highlands road in northern Sumatra, but we refused and dug on tenaciously; very grateful for the 32 x 22 tooth sprocket/chainring combo we’re using. The 22s have saved us countless times now. 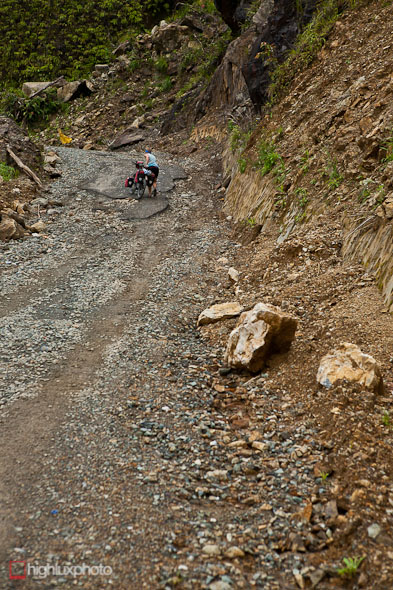 A few times slips had made a mess of the surface. 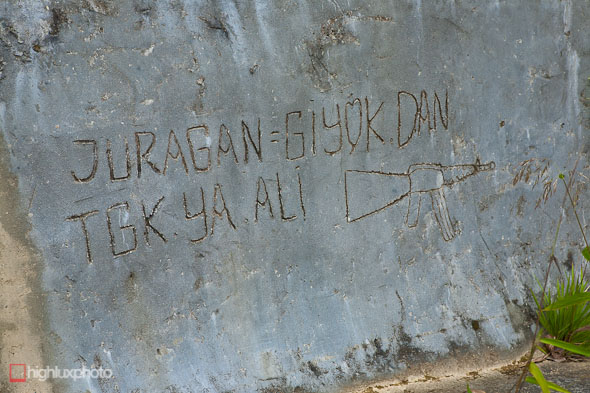 Graffiti possibly reflecting some of the past instability the region has seen. 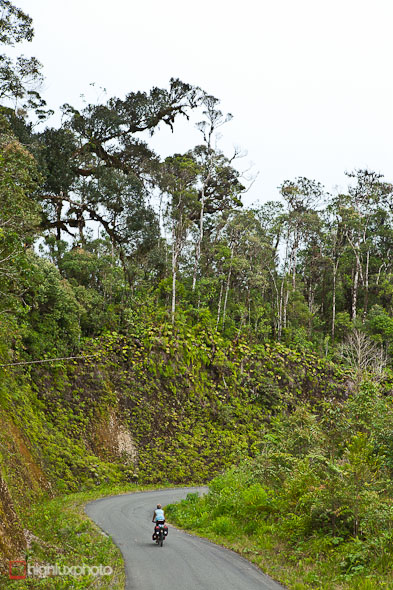 Shortly before beginning the descent the afternoon thunderstorm started and the hoped-for blast down the other side we’d been looking forward to became a struggle with numb hands and stinging rain drops. Soaked to the skin, we stopped at a shelter with a lone motorcyclist for a moment, and within a few words of speaking to him he’d invited us to stay with him in Beutong Ateuh – the same village we were headed for, which we knew was without a guesthouse. 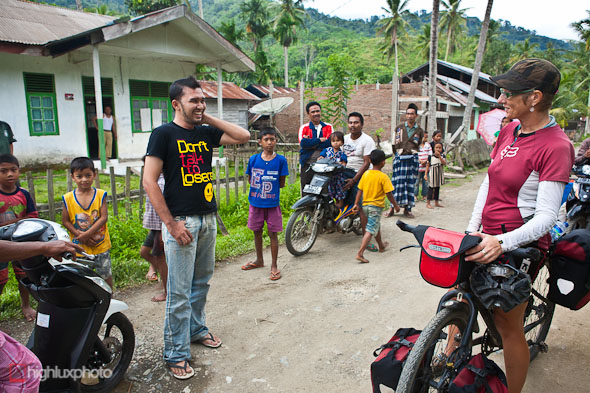 Beutong Ateuh was back down at 500m and we were glad to be there after a total of 2100m of climbing that day. Said, the guy at the shelter, told us to ask for him when we got to the village and we created quite a scene riding into this remote highland enclave and asking for Said’s house – getting pointed first in one direction and then the other. 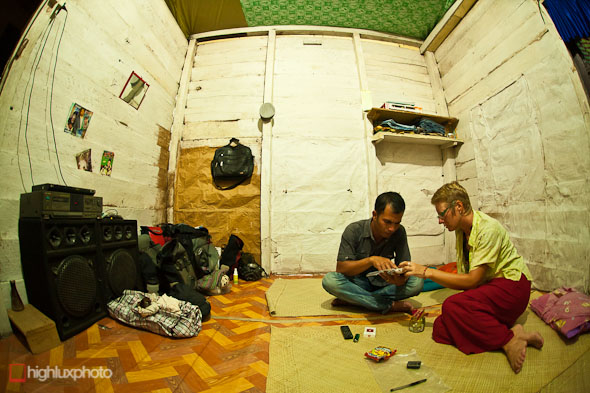 Said’s a guru (teacher) at the local school and lived in a minimalist 3 room hut attached to the school. His possessions were few: a motorcycle and a stereo, and there was little else in the house. Said spoke little English, but we got by with gestures and our minimal Indonesian. 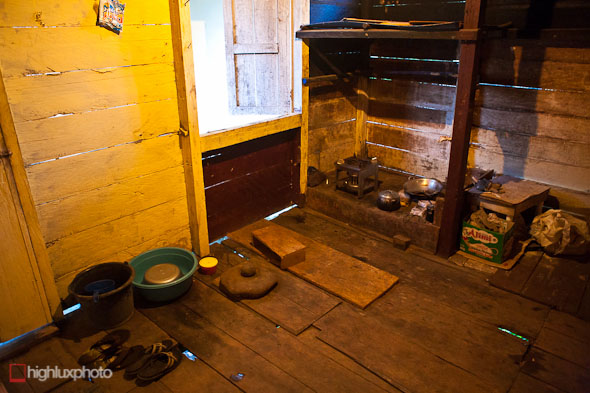 The only furniture was some tiny stools and we perched on them while Said generously cooked us dinner in his minimalist kitchen. The rice and salted fish went down incredibly well. 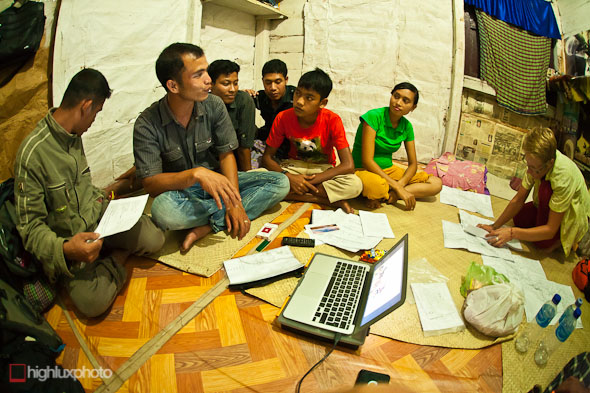 In the evening some of Said’s mates came over to check out the ‘bules’ (foreigners) and we gave them a slide show on our macbook. The room got quite crowded at times as more people crammed in, curious to suss us out. 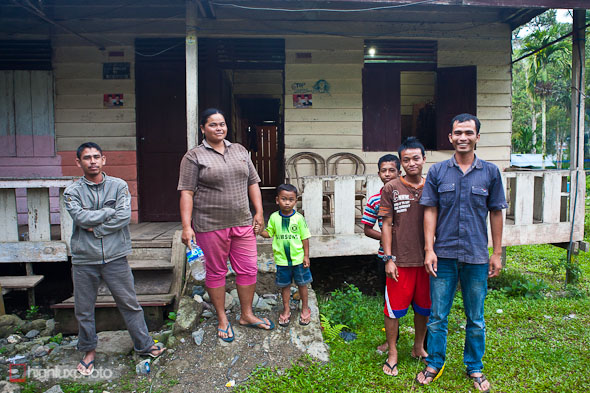 We spent the night on mats on the floor and in the morning Said fed us some eggs, sardines and rice and after saying goodbye to a queue of villagers we managed to get on our way. 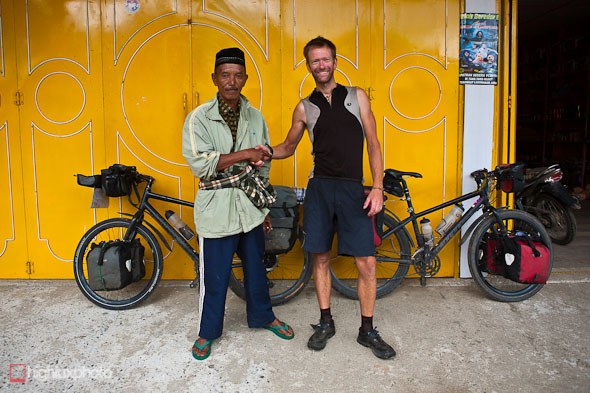 We grabbed some supplies for the day at the village’s only sizeable shop and more handshakes took place… [photo by Hana].

It’s hard to imagine that in 1999 Indonesian government soldiers came here and executed 60 men from the village, claiming that they were an armed resistance force and cultivating marijuana nearby. According to a Indonesian human rights organisation no evidence for this has been found. 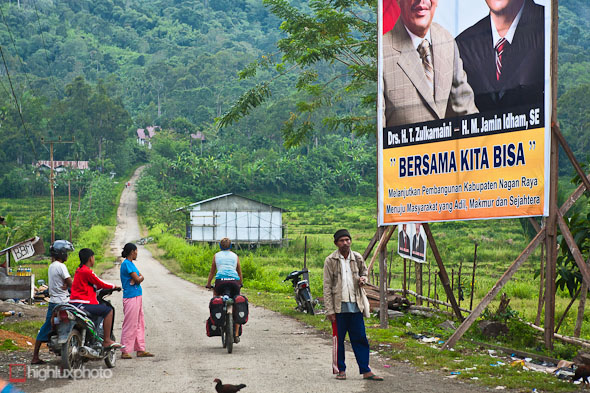 From Beutong Ateuh the road went nowhere but up, and we had another 2100m day of climbing ahead of us as we rode to Takengon. 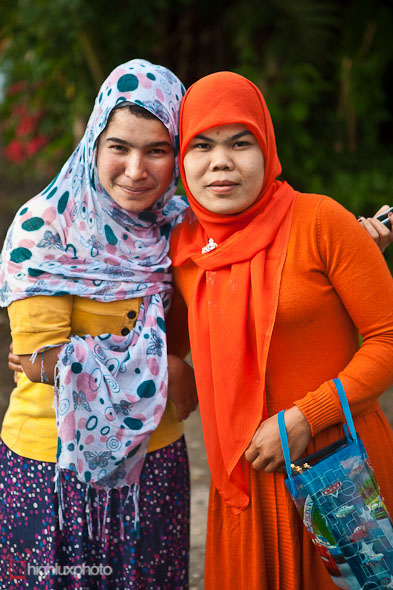 More hellos and photos on the road. 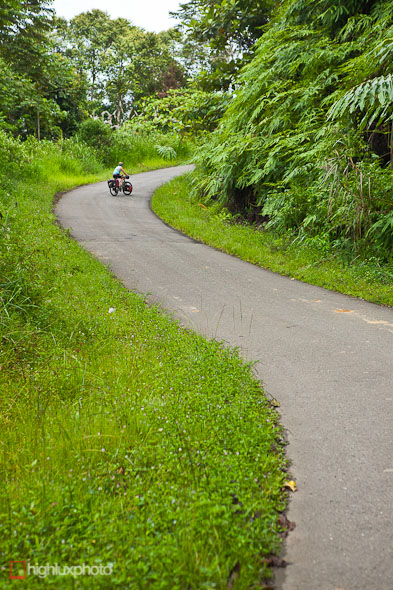 Even steeper than the day before the road gave us a full working over as we climbed for 600m. 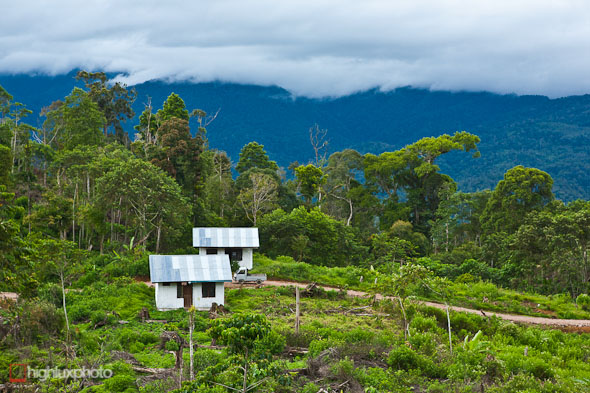 Passing small settlements on the crown of the range. 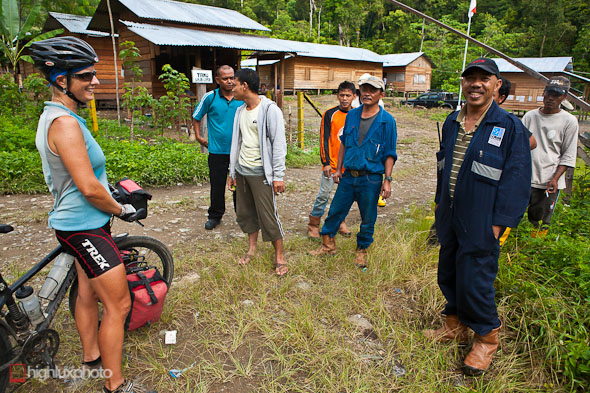 And then descending 400m into another valley where we came across workers doing some test drilling for gold. The operation’s run by the same company that owns Papuas notorious Freeport mine and if they hit paydirt here it will no doubt be an absolute environmental tragedy. I hope it never happens. 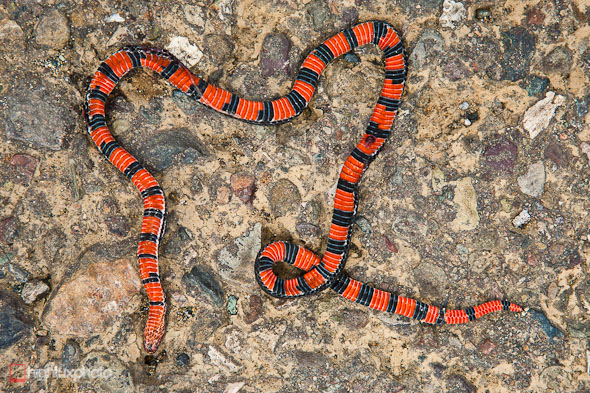 It’s sad seeing road kill, but at least it gives us an idea of the interesting critters that are lurking out there… 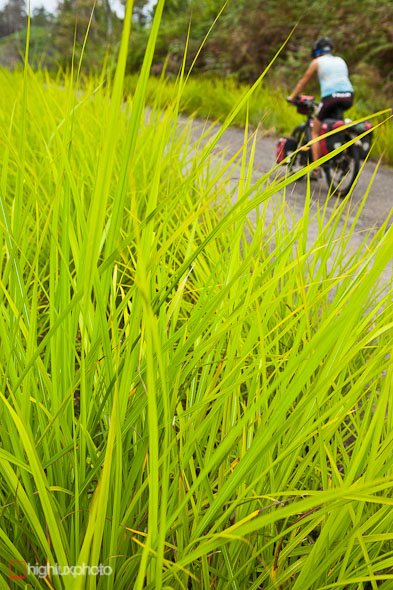 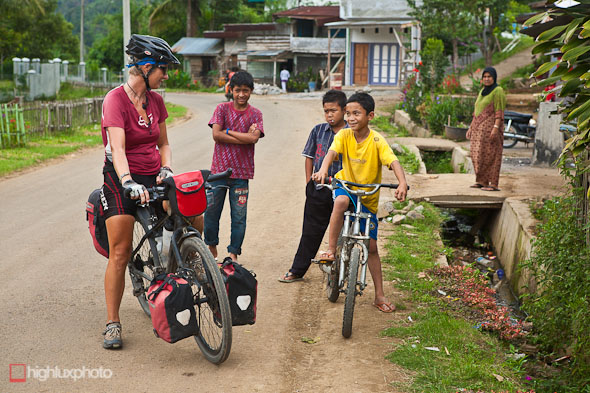 And then came out of the park into a more populated valley, passing small villages as we headed up the rolling road along the valley. 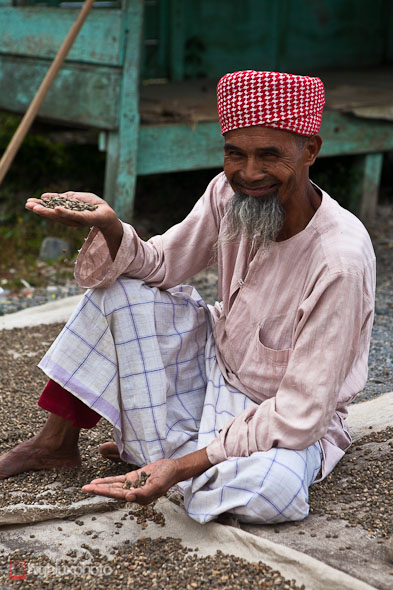 Coffee’s grown widely in this region. 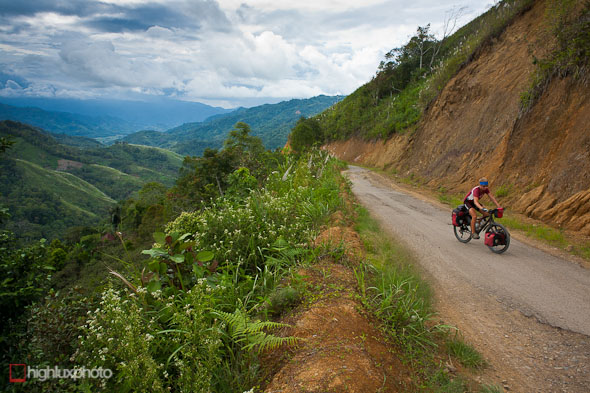 Then a final 300m climb to the last pass before Takengon. 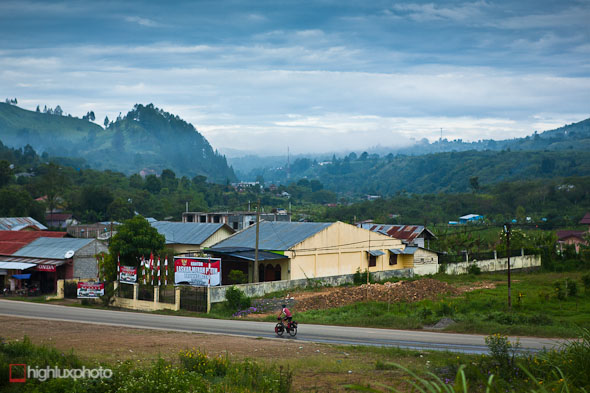