Not just another day on the road in Canada …

Today started at 2:20am when Mark got up to pee and noticed the sky looked a little odd…

‘Come and check this out!’, he says. Sure enough; the Northern Lights were in action. Dragging myself half out of the tent in my sleeping bag, I lay there on my back for the next 30 minutes watching strange flashes and strobes and weird twisting lights in the sky. Lucky for us the sky is dark at night now, though this means being extra wary of noises and getting up during the night as we can no longer see what’s out there!
A few hours later we’re packing up after a breakfast of muesli and instant coffee when the neighbouring RV owner comes over to investigate the crazy cyclists who turned up as it was getting dark the night before. He spies the ‘NZ’ on my panniers and we spend the next 10 minutes listening to his stories of hitch-hiking around New Zealand in 1970. His comments centre around the terrible flat beer that was delivered to the pubs in a tanker, and how much better the campgrounds are over there – there are no kitchens or lounge areas over here.

We pedal out of Fraser Lake, past the sign that says 155km to Prince George. It’s 8:45 and we’re hot and taking shirts off after the first short climb. We both notice a quick movement off to the right – it’s a coyote startled away from his breakfast of road-kill baby moose. We haven’t seen any more bears on the Yellowhead Highway, but there’s still wildlife around. The road is the busiest we have experienced so far on our trip. There appears to be a lot of forestry in this area and every other vehicle is a truck either laden with logs or wood chips, or the ever present RVs the size of small houses. The shoulder varies from comfortably wide, with rumble strips and jarring frost cracks every few metres, to non-existent, and the drivers from extremely courteous to seemingly wanting to run us off the road. The temperature keeps climbing, although the pay off is a strong tailwind. It’s finally our turn for some good weather!

60 kilometres fly by and before we know it we’re in Vanderhoof. I’ve no idea where the name comes from but I’m pleased to see the sign that claims we have arrived at the geographical centre of British Columbia. We must be making progress on the long road haul to Banff. After a hour long break to restock, eat peanut butter sandwiches, drink coffee in a can and refill our water bladders it’s back out into the heat. Flicking quickly through the gears as the wind helps accelerate us along; a few minutes up the road and the sweat is dripping off my arms and into my eyes again and soaking the shirt I’ve put back on to keep the sun off. This stretch of road seems particularly narrow, and the traffic barely has room to squeeze past us. A bigger than usual obstacle up ahead turns out to be the bloody remains of a beaver, the first we’ve seen out of the frequent ponds and lakes alongside the highway. Still 95km to Prince George… time to put the iPod’s on, to try and drown out the traffic roaring by only inches away, and to help keep the tempo up.

The afternoon goes by in a haze of sweat, dust, noise and trying to hold our place on the road. Squirming around constantly on the saddle, and standing up for a few strokes every few minutes does little to ease the discomfort of two 150km long days on the bikes. Who said Brooks saddles were meant to stop you getting saddle sore? Pulling over on a dirt side road we put on Biomaxa chamois cream, stuff handfuls of scroggin in our mouths, refill bottles, slather on more sunblock, discuss what we’ve been listening to and notice another touring bike stopped on the opposite side of the road. Some poor cyclist going in the opposite direction – he gives us a quick wave as he gets back on his bike and rides off head down, without coming over to chat. The headwind must be brutal. We start spinning again doing rotating 3km turns on the front. 50km to go, 30km to go, then the fast food outlet and hotel billboards start in a continuous parade of what’s on offer in the biggest city we’ve seen since flying out of Anchorage over two months ago.

Shortly after 6 o’clock I spy a small block of shops and a sign for rotisserie chicken. We get cold drinks, salad, bread rolls, jelly beans… and the chicken. The drinks are gone in a flash, the rest stuffed into panniers for the final kilometre to the campground. Checking in I ask if we need coins for the showers and do they have wifi: unlimited hot water and wifi have been scarce for the last two months. We look at the nearest sites on offer and in the fog of tiredness dither over decision making, but finally get to park the bikes for the day on a patch of grass. Another 152km of hard hot work. Priorities: sweaty bike shorts off, eat the whole chicken, pitch the tent, shower, laundry, Internet. It’s now 11pm, the Jellybeans are almost gone. Mark is struggling to get up to date with the blog posts, and I’m struggling to fight off the mosquitos and keep my eyes open. I was hoping to read my kindle but it’s past our bedtime already. I wonder if, and what time the sky starts its craziness tonight… 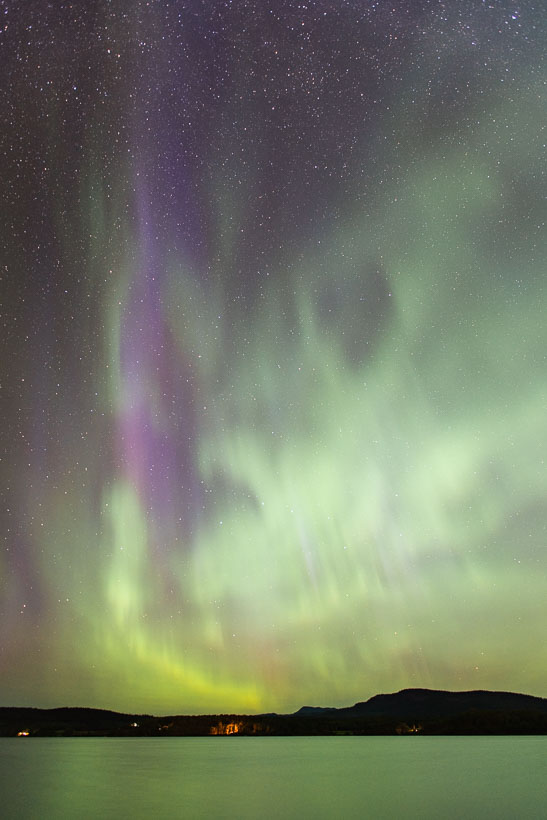 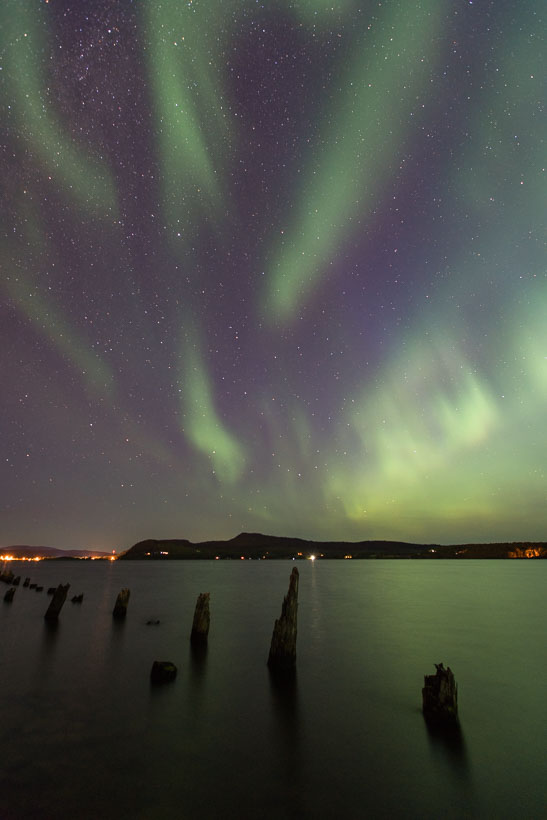 The Aurora Borealis at Fraser Lake, BC, Canada.